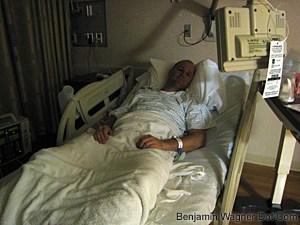 The Lenox Hill’s ER was manned by a slight, Russian-speaking security guard.

“Name, age, and ailment,” he said handing me a pink slip of paper.

I paused at “ailment,” puzzling over how detailed I should be. I wrote, simply, “APPENDIX,” then took my seat in the dank, crowded waiting room.

An elderly black man, maybe 85-years-old, sat slipping in and out of consciousness to my left. A middle-aged white guy in a softball uniform held his twisted pinkie aloft. A drunken, heavy-set Latina mother berated her daughter under her breath. “This is a pimple,” she said. “Not an injury. I should be home with your brother.” A teenager in a soccer uniform sat in a wheelchair, her face streaked with tears, her knee bound in bandages, her parents darting around the room fitfully.

The second hand swept slowly across the clock face. Lou Dobbs droned on about Sarah Palin on CNN. Sirens passed outside. Triage nurses stepped into the waiting room and plucked patients one-by-one from this fluorescent purgatory.

I riffled through my bag, nervously seeking distraction from the pain, the eye contact, and the awkward environment.

Then Abbi walked in.

“How long have you been waiting?” she asked. “Do they know that your appendix could burst any second?”

A steady stream of doctors, nurses, residents and assistants paraded through my narrow, curtained space. I told and re-told my story, gave more blood and urine, and teased what I could from whomever seemed in charge at any given moment.

Information came in fits and starts, and from various sources. The repetitive nature of my symptoms puzzled them a bit (appendicitis tends towards the sudden, not chronic), though the CAT scan seemed conclusive. “He’s confirmed,” they’d say, then begin poking and probing again. “Maybe it’s a stone? Tell me where it hurts again?”

Abbi and I sat there in the silences between doctor visits staring at each other in disbelief. I knew intellectually that this was a minor operation on a supurfluous appendage. But I was scared. And I was sad, not for the moment, but for the future. Family notwithstanding, I’ve never felt the risk of losing someone or watching someone suffer so tangibly. We laughed at ourselves through crocodile tears.

I was finally admitted around ten o’clock, and rolled upstairs to the ninth floor. The hallways were quiet, if depressing. They wheeled me into room 933. Bright light spilled through the door frame. A curtain separated me from another patient, A. Lartina. Abbi and I looked at each other uncertainly.

“Mrs. Wagner,” the night nurse said. “They need you downstairs in admissions.”

I lay there in the dark listening to the sounds of the ward — groans, wheezes, coughs, and beeps — and puzzling over what would come next. When would they get to my surgery? Would I be able to run the marathon in six weeks? What about Saturday’s show?

Abbi came back with answers.

“The diameter of the appendix should be about 5 cm. Your’s is 13. So it’s definitely appendicitis. Dr. Dawson is scheduled to do the operation at 5 a.m., and he says it’s pretty routine laparoscopy: three incisions, a tiny camera. But they want you overnight again tomorrow night.”

The night nurse strapped my legs into two air-driven sleeves for my calves (to promote circulation), showed me my little, plastic nighttime pee container and remote controls, and left. Abbi kissed me, and left. I plugged in my headphones, tried to find a comfortable spot, and drifted in and out of sleep.

In the small, poorly-lit hours of the morning, Dr. Dawson’s assistant had me sign some papers, my life, I presumed. Still, five o’clock came and went. Finally, an attendant told me an emergency in the OR had bumped my surgery to nine o’clock. I asked if I could take a walk. Which is when I spotted it.

The sky was just turning blue as I wheeled my IV unsteadily down the hall. I was talking to my father on my cell phone as I stepped towards the window. There, overlooking Park Avenue, was a gorgeous, well-lit, wood-floored, fully-vacant single room.

Hospital time is compressed and extended, especially when anesthesia and pain killers are on the line. I finally made it to the operating room around noon. Abbi stood bedside as Dr. Dawson explained what to expect. He was tall and slender, roughly my age, and always smiling. We talked about swimming. He told me he thought I could still play on Saturday, but that I should take it very easy. He told me he thought I’d be able to run the marathon. And then he told me it was time to go.

Pulling away from Abbi was the hardest part, like a Hollywood movie but with worse lighting. I retained an odd balance of confidence and terror as they rolled me down the hallway towards the operating room. There was gear everywhere, so much so that it was difficult for my gurney to pass. Masked doctors, nurses and attendants rushed about. It was cold and bright, like a high school designed in the 60s with all it’s windows open in the dead of winter.

They rolled me into the operating room, pulled me alongside the table, and asked me if I could get myself across. Two huge, circular, mirrored lights shone overhead. A white television monitor with color bars rest just over my shoulder. Dr. Dawson, his shoulder wrapped in a blanket, talked with a nurse as she removed the laparoscopic instruments from their sterile, plastic wrappers. A nurse strapped down my legs, then my left arm, and then …