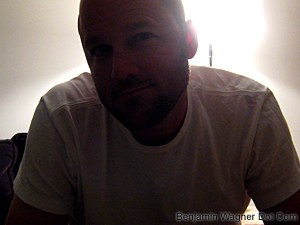 By the time I got home tonight, my garment bag was somewhere between Los Angeles and New York, my Blackberry was missing, and both my cell phone and iPod were out of power.

Yesterday’s flight was like the bus home from summer camp. There’s Ryan from news, Jen from Press, Mike from Ad Sales. I slept until roughly Kansas, then knocked out seventy-five pages of Robert Greenfield’s “Exile on Main St.: A Season in Hell with the Rolling Stones.”

We landed just before ten. I was at baggage claim groggily chatting with my colleagues by 10:15. And then, one-by-one, they disappeared as I watched the same two bags circle the baggage carousel. 10:30. 10:38…

I walked in the door just before midnight, hugged Abbi for fifteen minutes, then dug into a late sushi dinner. It wasn’t until later that I discovered that my Blackberry was missing. And it wasn’t until three o’clock eastern standard time that I finally climbed into bed.

I awoke at 8:56, exactly thirty-four minutes prior to my morning news meeting.

So, what to say of today. Well, The Network broke last year’s record by 25% on TV, and 110% online. And we posted some time-lapse of the VMA red carpet. That was cool. I ate lunch at 4pm. That wasn’t.

But I never found that Blackberry. An, being that all my power chords were in my garment bag, my cell phone died, and the my iPod. Which left me fidgety. But fine. Because it ended well.

Abbi met me at The Dead Poet.

So frankly — for a Tuesday, anyway — it wasn’t half bad.