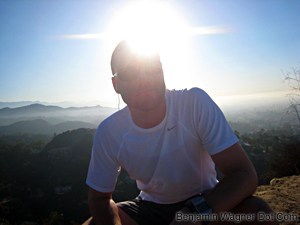 Hollywood feeds on its young. To celebrate the thirty-seventh anniversary of my birth here, then, is not without irony. To be away from home and enduring what is typically the most challenging week of the year only added insult to injury.

I woke, fittingly, to AT&T’s oft-heard ringtone, a sound that prompts dozens of my colleagues to reach for their hips simultaneously. It was the first of what would tally to well over one hundred hugely-appreciated email, Facebook and cell phone birthday wishes.

I was groggy and tense from another fitful night of sleep, one in which my usual work-oriented ruminations were compounded by life stage worries set to a Talking Head’s soundtrack

Having pounded the star-strewn city streets all week, though, I had one goal: run the hills. And so I set out westward on Hollywood Boulevard — past Fay Wray, Grace Kelly and Ingrid Bergman immortalized in the pavement — then turned north on North Vista, entered Runyon Canyon Park, and began my 700 foot climb towards Mulholland.

The jeep trail was crowded with dog walkers, hikers and joggers. It was a gut-busting, lung-searing climb. When I finally approached the lookout, a film crew was setting up a dining room table complete with china, crystal and linens. I crept towards the edge, and looked out over the beautiful mess that is Los Angeles.

Later, at work on the Paramount Studios, I watched Christina Aguilera, T.I. and Kid Rock prepare for the 2008 Video Music Awards from just a few feet away. I climbed high above our red carpet, looked down, and considered that I was further behind-the-scenes than any seventeen-year-old version of me could have ever imagined.

In my backlot office, I overheard a story about a “young Holywood” party we’d covered the evening prior.

“Yunno, I think [name of young couple redacted] just walked the carpet, posed for pictures, picked up their swag, and left. They couldn’t have been there fifteen minutes.”

Driving home, I past a red carpet for HBO’s new vampire series, “True Blood.” As I crawled westward on Hollywood towards The Roosevelt past neon-lit homeless, street kids and prostitute scene straight out of a Guns ‘n Roses video, I thought about youth, and broken dreams.

Back in my hotel room, I cracked a beer, ordered a burger, and sat down to open the two envelopes slipped under my door: a “velvet Elvis” greeting card from my father, and a FedEx envelope from my brother containing drawings by Ethan and Edward.

I called Abbi and delivered a stream-of-consciousness monologue about my day, my job, my life, and the meaning of it all until I was too tired to talk anymore. Room service came, and I leaned back in the couch, and laughed at Steve Carell’s Maxwell Smart. I spotted my old friend Michael Stipe on the cover of a magazine, and took an intermission from dinner and the movie. I slipped on my headphones, and spent a minute reading about R.E.M., that band that has meant so much to my last twenty years.

And as I slipped of into the second day of my thirty-seventh year, I felt the edges of my mouth slip upward, and the anxiety and frustration slip away. I thought about my dear wife, and my charmed life, and that view way up there above Los Angeles.

From the heights, one can see further — even on a hazy day. 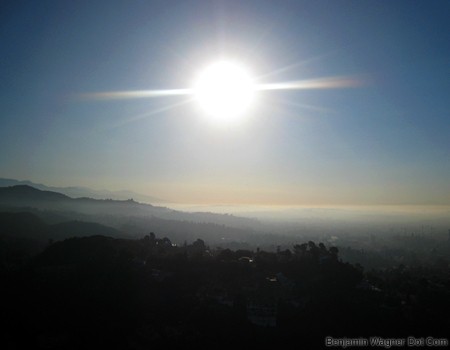