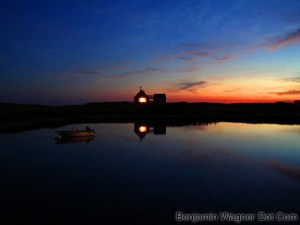 Over the years, I’ve invested a lot in the restorative powers of Nantucket.

For me, for better or worse, true or false, the island has provided significant counterpoint to this island.

Still, the place was something of an acquired taste.

I first visited Nantucket just a few months after moving to Manhattan. I was living with my brother, surviving on hot dogs and generic Tang paid for by the $5/hour I was earning keeping the Men’s Journal equipment closet.

My mother, perhaps sensing a post-collegiate slump, invited me to crash on the couch of the condo she’d rented downtown. When she spotted my tattered t-shirt and shabby sneakers, she whisked me to Main Street for a welcome Preppy Makeover.

It was quaint then: tree-lined, stop light-free, cobble-stone streets. But it had a stuffy air of New England exclusivity.

Even in my Topsiders and cable knit sweater, though, I felt like an imposter.

Years later, following a hiatus, the tenor of my mother’s descriptions changed. No longer ballyhooing cute shops, tony restaurants, or the crowded harbor, she began to talk about long, lazy afternoons, wind through dune grass, light on the bay, and shifting sands.

And then, one afternoon, she said, “You’ll never believe who I met today,” and Madaket became Mister Rogers and our neighborhood.

I haven’t missed a summer since.

When I speak of Nantucket now, I speak of the wild, desolate, (comparatively) downtrodden West End.

Windows are streaked with sea salt. Sheets are damp with dew. And a fire is often called for at night, even in August.

There’s no corner store, or video store, or dress shop.

On the way out of the office tonight, a colleague inquired, “Will you be live blogging your vacation?”

Tomorrow morning, when Abbi and I hop our one hour flight to Nantucket, my Blackberry and laptop will remain here in New York.

And when I return to work Tuesday morning, will the tranquility of the sky (uncrowded save for the stray passing commuter flight), the serenity of sea (dotted as it is with white sails), and the still of the sand (edging slowly towards Tuckernuck) keep me tranquil, serene, and still?

But it won’t be far.