Magic In The Night: Bruce Springsteen At Giants Stadium 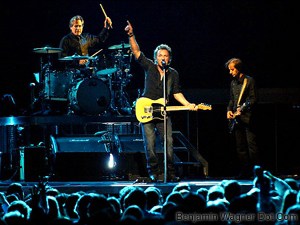 And then it happens, the countdown that’s launched a million songs.

The band catapults into “Out In The Street,” accelerating from zero to sixty in less than two measures.

Springsteen is smiling from the word go. He’s sweating by the second chorus, jabbing at his Fender, strutting and posturing and posing.

Later, in the third verse of “No Surrender,” the bands falls back into the shadows. The light go black and blue. Springsteen stands alone in the spotlight, his solitude punctuating his lyrics.

This is Bruce Springsteen at 58-years-old: outspoken, unstoppable, and dextrous. A whirling dirvish with a throat full of gospel truths.

As the band moves effortlessly from “Hungry Heart” to “Summertime Blues” it dawns on me: this is a revival. This is Bruce’s church. We are his congregation.

He steps into the crowd, reaches out and touches his audience. He lays his hands on them. He heals them.

Later, I get chills singing along to “Tunnel Of Love.”

“Oughta be easy, oughta be simple enough,” we sing together.

Goose bumps race up my arms. I am dancing in the aisle, holding onto my wife, and crying.

At a rock show.

Patti leans in for the last verse of “Because The Night.” The couple sing just inches apart from one another. I stand there grinning, loving her because she’s not perfect, because she’s not Hollywood. I root for them.

Nils rips into the solo, staggering and spinning across the stage, then crescendoing into a hands-free front-flip. My mouth is agape.

Bruce introduces “Living In The Future” with a not-so-subtle diatribe on the Bush Administration. The crowd grows chillier, but The Boss persists.

“Torture, wiretapping — these are things that are supposed to happen some place else,” he says. “This is a song about sleeping through the changes in your own home town that you never thought you’d see.”

Afterwards, the fire and brimstone continues.

“When I get down to that river of joy,” he says from New Jersey’s largest pulpit. “I’m gonna make a beautiful noise. But I can’t make that noice alone! Are you with me?”

This is it: Faith and Sex and God in the belly of Babylon by the Hudson. This is the Church of Bruce, and I am born again.

“Who’ll be the last to die for a mistake?” he asks, then resolves, “It’s gonna’ be a long walk home.” Keyboardist Roy Bittan’s part sounds like a dusty, old church organ. It is a hopeful eulogy.

“Show a little faith,” we sing. “There’s magic in the night.”