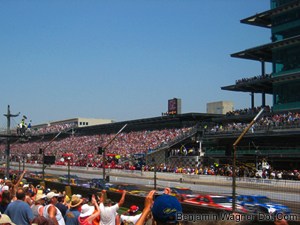 This is it: The Fall of Rome.

It’s Death Race, Gladiator, and The Running Man. The MPHs and RPMs are impressive, but we’re here for the five-car pile up: crushed steel, shattered plastic, frayed rubber.

We hatched the plan at my bachelor party. Ten months later, here we care: high school pals, James and Jon, my father, and Uncle Stan, all in for a weekend of beers, cars, and meat in all its forms.

It all begins with me freaking out a just little bit.

We’ve parked nearly a mile from our objective in a neighborhood we’d otherwise avoid the remaining 364 days of the year.

There are thousands of people swarming around, everyone sprinting towards the Indianapolis Motor Speedway as if we were three minutes shy of post time. Start time, though, is three hours away.

I’m convinced that one of a few scenarios is going to play out: I will end the day drunk, sunburned, and left for dead in the infield, or suffer from interminable boredom.

We find our seats just nine rows off the track and settle into our first Fosters beneath the blazing Midwest sun. We watch the spectacle wind up. First, the cars are pushed into position. Then the pace cars. The stands continue to fill. The music grows on the PA louder. The place is winding up like a top.

James, Jon and I take a walk towards the infield. We catch the final seconds of Charlie Daniels’ encore, “The Devil Went Down To Georgia” (what else did you think he’d encore with?), then stand in the center of the field as Charlie’s fans file past. Men are shirtless and sunburn. Women are squinty-eyed and grinning. One asks Jon, “Got any beads?”

The gentlemen start their engines as we exit the track’s underpassen route to our seats. 300,000 race fans are on their feet. The pace cars roll out, leading the drivers around the track three times at low speed.

The green flag flies, and 42, 385 cubic inch, 800 horse power, 3600 pound slabs of steel roar by like whining jets, so fast you can’t track much more than a blur of color. The Doppler affect is staggering. The roar is deafening. It’s a completely tactile experience, like standing in the mosh pit at a ’77 Sex Pistols show. When the cars blow by at 190, you feel it in your nuts.

Whether or not I cared about cars or racing an hour ago, I do now. Suddenly, I get it.

Twenty-nine laps in I realize that I’m barely breathing.

By the 100th lap, flecks of black rubber dot our white t-shirts. We’re five Fosters 24 ouncers and one giant turkey drumstick in. James and Jon are slap fighting just like high school. My father rolls his eyes. My uncle Stan appears with a fist full of giant turkey drum sticks.

By the 150th, the sun is falling behind us. Jon kicks his turkey drum sticks behind the next row in front of us. The woman at whose feet said drum stick suddenly appears is not amused, reached down, and hands it back to him with a grimace.

The race itself is something of a bust, punctuated by an inordinate amount of caution flags. I could care less, though. For me, the visceral experience — the sound, the smell, the bone-rattling rumble — is enough.

Jimmy Johnson takes the checkered flag, relishes a victory lap, then white smokes the track in front of us while pumping his fist out the window. We spill out into the golden hour light, laughing and cursing and punching each other, more alive, perhaps, than just a few hours before. 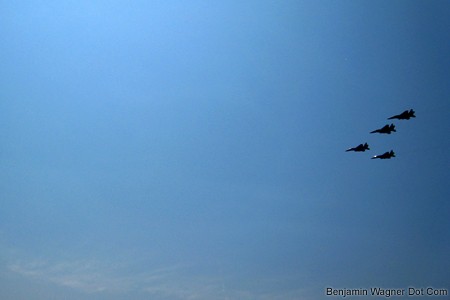 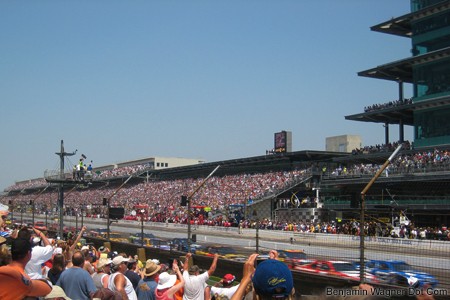 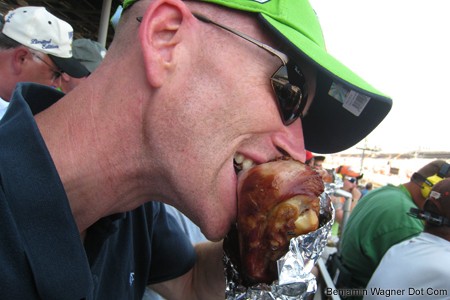