Comic-Con Reconsidered (Or, The Triumph Of The Nerds) 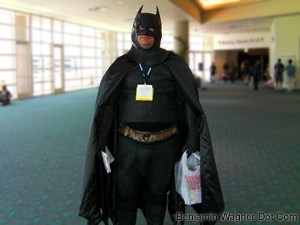 Prevailing wisdom about San Diego’s Comic-Con is that it’s an assembly of misfits, nerds, freaks and geeks salivating over B-listers, back issues, and collectibles.

In fact, I traded in that very same simplistic, diminishing description as recently as just last night.

Tonight, though, I counter with a new thesis.

Comic-Con is an inspirational gathering of apparently disparate peoples: young and old, physically capable and challenged, thin and not-so. It is a safe space for difference, where the one’s unique offering is rewarded and relished. Better still, it is a place where difference embraces difference.

I rode the escalator next to a full-on, latex-and-horse hair Davy Jones (the one from “Pirates Of The Caribbean: Dead Man’s Chest,” not The Monkees) — barnacles and all. And while I felt a little embarrassed to be standing near him (especially in my blue blazer) everyone else ate it up.

Comic-Con International began in 1970 as gathering of just 300 comic book illustrators, publishers, and fans in the basement of the U. S. Grant Hotel.

It’s the Triumph of the Nerds.

Frankly, the world would be a better place if we all tore a page from Comic-Con’s playbook.