Bouncing Over A White Cloud – Video 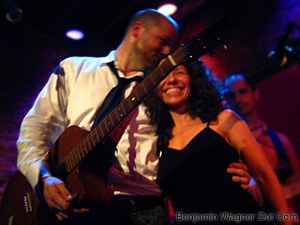 Rockwood was rowdy. I was anxious. And then it all turned.

So I left the office at seven o’clock and struck out through a sweltering Times Square with my guitar, computer, camera and a bag of CDs strapped to my back. I jammed onto a crowded F, turned up my iPod, and began worrying.

Suddenly, all of my own songs sounded foreign. Suddenly, rushing through rehearsal seemed imprudent. Worse, I was suddenly at Delancey Street — one stop too far.

I hopped off the subway, and headed for the street. Ten minutes later, six wrong turns and four steep stairwells later, I stepped into the golden hour, and strode towards Rockwood.

It was 7:45 by the time I stepped through the doors. Chris, Tony and Jamie were on hand and ready to roll. I stepped into the bathroom to change into my rock clothes (ironically, out of a t-shirt and jeans and into a dress shirt and tie) as the guys began soundcheck.

My heart was still racing. Beads of sweat were still bursting from my forehead. I prattled nervously.

The guys were on fire. Tony was rockin’ his bass face. Jamie was squinting and squirming; really feelin’ it. Chris was crushing his parts, even if he seemed an iota distracted by the raucous audience.

Soon enough, Chris slid over, and I was on.

Why, after nearly twenty years of performing every show feels like my first is a mystery to me, but there it is. And there I was: 8:14 pm ET on stage at Rockwood Music Hall. Jamie counted to four, and we were off.

Years ago, in high school, I played Pippin in the play, “Pippin.” There’s a scene in the first third of the book where this kid, a prince, has inherited his father’s kingdom. And he begins this song,”Morning Glow,” all by himself on stage. By the second chorus, though, his entire royal court has slipped in behind him, and backs him up in full harmony.

That’s what it feels like when the band kicks in. Like you’ve got an entire court — better, an army — on your side. The audience felt it too. They were with us: rowdy and raucous and loud and still not entirely engaged in the rock show before them.

I was a little unsteady, though I’m not sure anyone noticed. I tweaked my volume a few times, bumbled through a few chords, dodged a note or two. But the set went well. We played “The Invention Of Everything Else” (What? You haven’t downloaded it yet!?!) in order. And when the time came, I invited esteemed chanteuse Jamie Leonhart on stage.

“Promise” started softly, built through the bridge and finished strong. Jamie’s harmonies were angelic. And the audience noticed, and responded in kind. “You ain’t heard nothin’ ye,” I said before taking a deep breath, counting to four, and softly strumming a D chord (dropping the high E every-other down stroke).

“Leaves were fallin’ just like embers in colors red and gold,” I sang.

“They set us on fire,” Jamie sighed. “Burning just like a moon beam in our eyes.”

“Somebody said they saw me,” we sang. “Swinging the world by the tail.

A few remaining talkers were shushed.

“Bouncing over a white cloud… killing the blues.”

The venue was still, save for the gentle swaying of the band. Jamie and I smiled at one an other, then resumed the second verse. The audience was rapt. We were rapt, as curious as anyone else as to whether this beauty we’d so unwittingly created together — all of us: the band, Jamie, me and the audience — would land gently.

Chris leaned softly into his solo, closing with the signature notes that echo the refrain. The last verse came to me like a ghost. Tony closed his eyes. Jamie brushed his snare. And everything flowed.

Even now, it’s difficult to describe the moment, except to say that it was precisely the kind of magic one hopes for, but rarely observes, let alone takes part.

It was warm, and wonderful, and cast a glow on everything.

Moments later, Jamie stepped from the stage beneath a fusillade of applause. Everything that came before — the noise, the distraction, the anxiety — slipped away. My heart beat like new, my feet settled into my shoes. I counted to four, and began again…