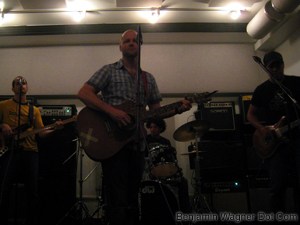 No matter how good you know your best friend’s band sounds, you can’t really know until you’re sitting on the floor in the aural center of the kick drum, bass and guitar amps.

You know Chris Abad and I are performing a double bill at Rockwood Music Hall Thursday night, right?

So it’s 11:30 on Tuesday night, and I’m sitting on the floor here at Ultrasound Studios on 30th & Eighth with the absolute best seat in the house for Chris’ set.

Chris’ songs are muscular power-pop, like The Outfield sans the nausiating, cheeseball vocals, or STP with better lyrics and vocals. They twist and turn, full of stops and starts and crooked changes. I defy you to not bang your head and sing along.

My songs are straighter, far more singer/songwriter fare. Lots of strumming and arpegiating. Heck, I have no idea how they sound, really. If only I could sit on the floor in front of my own rehearsal…

Anyway, Thursday’s gonna be totally badass. I’ll be doing most of my new record, “The Invention Of Everything Else” (you own it already, right?), plus a few key chestnuts (including — I’ll tip you off right now — a full-band version of “New York” for the second time ever).

And we’re recording it for iTunes, so hopefully at least five of ’em’ll work.

Because when it feels like this to knock back a 40 and rock out with your friends, that’s more than enough.