My Life Inside Rock (And Out) 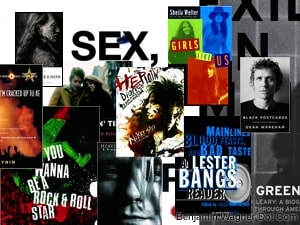 For me, browsing the music section at the local book store is a little like an alcoholic ogling the top-shelf at the local tavern, or a sex addict wandering 4th Street in the Meatpacking District.

I have an unnatural (though entirely understandable, I think) compulsion to consume rock bios, memoirs collections and compendiums. I’ve read a ton: “The Dirty Life And Times Of Warren Zevon,” “Black Postcards,” and “Everything I’m Cracked Up To Be,” “Hammer Of The Gods,” “Conversations With Bono,” and “So You Want To Be A Rock & Roll Star?” — to name just a few.

This morning I finished “Hotel California” (which, naturally, I picked in anticipation of my recent sojourn there few weeks ago — but more on that book later). And so, when I found myself loitering outside of Abbi’s East Side office with fifteen minutes to spare, I strode immediately towards Borders.

Now, not all book stores are created equal. There’s a Barnes & Noble just downstairs from Abbi and my apartment, for example, with just one measly one shelf dedicated to rock books. The Borders on the corner of 57th & Park, however, had five, six-foot shelves full of the stuff. I was a kid in a candy store.

In just five minutes, I had a armload of options: “Girls Like Us: Carole King, Joni Mitchell, Carly Simon And the Journey of a Generation,” “Willie Nelson: An Epic Life,” “Mainlines, Blood Feasts and Bad Taste: A Lester Bangs Reader,” “A Freewheelin’ Time,” “Exile On Main St.” — and on and on and on.

“They should have some sort of Netflix for rock books,” I thought. “Oh yeah, they do: The library.”

The criteria? It’s a complex algorithm, really. Is it an artist about whom I know a lot already? Is it an autobiography or memoir (better) or a third party think piece (worse)? What era (post-1960 is crucial)? What genre? New release? Hard cover? Paperback? Will I need to download a bunch of songs to better contextualize the work? How many pages? How much?

At one point in my calculations I thought, “Yunno, that Chuck Klosterman doesn’t write fast enough” (I’ve read all of his books). And then, “I could live on the ’33 1/3′ series alone.” Which was right about the time I heard a distinct voice in my head say, “Get out!!!”

But not before hitting the checkout and tucking two new titles into my bag: Bill Graham’s autobiography, “My Life Inside Rock And Out” (oral history; love those) and “Rob Sheffield’s “Love Is A Mixtape” (Gen X, NYC journo writes about love and music — now in paperback!).

I’ll letcha’ know how it all turns out.