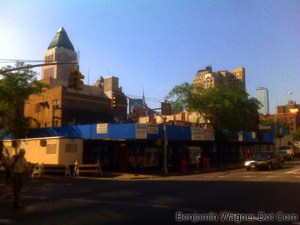 In the early days of my tenure here in Hell’s Kitchen, I discovered enthusiastically that two of the world’s most notable recording studios were within spitting distance of my apartment: The Hit Factory and Sony Music Studios.

The Hit Factory, on 54th between Ninth and Tenth, produced dozens of legendary recordings, including Stevie Wonder’s “Songs in the Key of Life,” Bruce Springsteen’s “Born In The USA,” and Paul Simon’s “Graceland.”

Sony Music Studios, on the corner of 54th and Tenth, was more than the building where Pearl Jam, Bruce Springsteen, Celine Dion, Jennifer Lopez, Kanye West and Christina Aguilera all recorded. It was the home of “MTV Unplugged,” “VH1 Storytellers,” and even “America: A Tribute To Heroes.” What’s more, the structure — once Manhattan’s largest sound stage — first served as a 20th Century Fox studio. “Miracle on 34th Street” and “Shaft” were filmed there.

More importantly, though, Sony Studios was my brother’s office for over ten years.

For a kid from Iowa with rock star dreams, it was always exciting to visit him there. The place was top notch. From the marble-strewn foyer through gold record-strewn hallways to leather-appointed lounges and hi-tech control rooms, it was the epitome of major label luxury. Each room came with a full binder of room service-like menus. From fresh fruit to champagne and cigars, anything and everything was available to the artist.

I saw Willie Nelson perform there. Chris stood at a urinal alongside Harry Connick. He worked with everyone from Mutt Lange (the former Mr. Shania Twain) to Rage Against The Machine, and Yanni.

I’ve lived on Tenth Avenue in New York City for all but two of the last fourteen years. I’ve walked past Sony ever morning since last April. And no development — and with the massive gentrification here, I’ve seen plenty — has disturbed me quite as significantly.

I’ve never sold a ton of records, though ProTools and the Internet certainly gave my music career a shot in the arm.

Nonetheless, with those great red bricks, too, go my adolescent dreams.

Some component of “The Invention Of Everything Else” is the acknowledgement of everything that came before, but won’t come again.

The dream is over.

The music, though, remains indefatigable.