Music Could Provide The Light You Cannot Resist 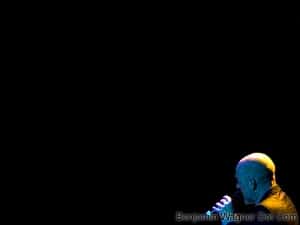 It was spring. Everything was in bloom. The pavement was slick from an overnight rain.

The bus stop on the corner of Spencer and Fairfield Roads was crowded with middle schoolers. Including me: a tall, bespectacled and braced ninth grader in a blue Land’s End oxford button-down, Levis 501s, and purple Converse All-Star high tops.

This day found me with a new cassette in my cobalt-blue Sanyo stereo tape player: R.E.M.’s “Reckoning.” I pressed the big, black “play” button and in three minutes of staccato snare fills, ska-influenced (but oddly-arpeggiated) verses and layered, nonsensical-but-melodic choruses, changed my life forever.

Twenty-two years later, just a few dozen feet from the Madison Square Garden stage, R.E.M. began the song again. And as I stood there smiling and singing along in full-voice, I considered just how deeply I’ve been affected by the band.

Just 24-hours prior, a first-timer at my “The Invention Of Everything Else” CD Release had commented, “I didn’t realize you sang with a southern twang.”

“Yeah, I’m not really sure where that came from,” I replied. “Probably Michael Stipe.”

R.E.M. not only broke me from my Duran Duran and Phil Collins stupor, they led me to a pile of artists from whom they’d borrowed, collaborated and conspired: massive acts like The Velvet Underground, X, and Wire, local faves like Pylon, Love Tractor, and Guadalcanal Diary, and collaborators The Replacements, Billy Bragg and Uncle Tupelo.

For a period there (have a listen to “Bloom” or “Out Of Your Head,” if you dare), I tried to write like Stipe, and craft harmonies like Mike Mills and Bill Berry. Stipe, or course, tends towards the obscure and non-linear. Mills and Berry tend towards backup vocals that don’t just mirror the lyrics, but augment them with new phrases.

Take “Harborcoat,” for example. “It’s my harborcoat,” Stipe sings. “Can’t go outside without it.” Berry, meanwhile, sings “Harborcoat is on.” And God knows what Mills is saying at any point during the song (including the verses). But it doesn’t matter. It all comes together beautifully.

I think I’ve pretty consistently failed at both the esoteric lyric and counter-lyric harmony, but it’s an aesthetic I value, one that trickles into every song I write. The last song on “Invention,” “Chasing Something,” isn’t terribly logical. Even Abbi asked, “What does ‘Drowning something real / Fumbling for to feel’ mean?” I dunno. It’s my “Daylsleeper,” my “Nightswimming.” It’s nostalgia and loss and regret rolled up in one pretty, major-key package. It’s nothing, and everything, all at once.

Like Stipe’s lyrics, Peter Buck’s guitar playing continues to inspire mine. While recording “Invention” few months ago, I hummed the guitar solo to Chris Abad.

And he’s probably right. Buck’s not known for his incendiary solos. He’s known for his right hand. That’s what’s picking out all those chords, and what makes everything shimmer and chime. Listen to the verses of “Giving Up The Ghost.” That’s exactly what I asked Chris to replicate. To me, those open chords are what give songs breath.

When it comes to the bridge, where most solos show up, Buck usually just plays a few new notes, all derived from the root chord, and all simple. He edges things just a few inches to the left. Nothing major. Nothing shocking. But — partnered with layered vocals, keyboards and percussion (shakers, tambourines, hand drums) — the song is transported. We slide into the last verse before the big finish.

R.E.M. didn’t just influence my music, though, they offered me my first and best art appreciation courses. Take a look at the cover of R.E.M.’s “Green,” then my “Bloom. Look familiar? Take a look at “Murmur,” then check out my “Out Of Your Head.” The band’s aesthetic has always been slightly askew, out-of-focus, and left-of-center. They would never put themselves on an album cover. And when they did (see the recent “Live” release, another thing they’d “never” do), it was done artfully. (And when they did, I did.)

R.E.M. concerts favored slow-motion 16mm films of swimming swimming when pyro was in vogue. Even now, as lip-synced, click-tracked, choreographed spectacle owns the day, the band performs with little more than their equipment.

More than just music, though, the band — especially Stipe — helped shape my entire world view. That resonance, and the band’s prescience, was entirely evident to me at their MSG show.

I wasn’t much for “Ignoreland” when it hit the b-side of the band’s 1992 LP, “Automatic For The People.” It’s anti-Bush tirade struck me a linear and sophomoric. Sixteen-years-later, though, the conceit bears out. If “the information nation took their clues from all the sound-bite gluttons” then, what the hell are we doing now? We’ve got a war on two fronts, four dollar gas, and an earth wrecking hotter summers and bigger storms on us, and we’re watching “American Gladiators” (again!) and worrying about who Jennifer Anniston’s dating.

So when the band performed the song again — denser, thicker and more propellant now — in front of swirling, hypnotic black-and-white, “Dr. Strangelove” graphics, then jumped straight into “Man-Sized Wreath,” I had to agree. I’d have thought that by now we’d be ready to proceed too.

Even their most crass, simplistic hit, “It’s The End Of The World As We Know It (And I Feel Fine)” (from which, gratefully, the MSG show was spared) spells it out: these are ends days, people. Watch you reality TV and gobble your soma if you must, but we’re soldiering on. We are young despite the years. We are hope despite the times.

Which is, perhaps, where R.E.M. and I collide. And, not surprisingly, where the band left us at Madison Square Garden.

“Let’s begin again,” Stipe sang in the encore. “The finest example is you.”