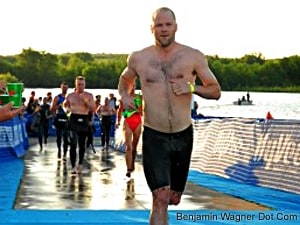 The sun was just breaking the horizon as “The National Anthem” began blaring from a shoddy PA. Nearly two thousand of us stared solemnly across the water when a short, wide rainbow materializing like a Technicolor ghost before us.

That we were swimming at all was, of course, a major accomplishment for organizers. Flooding had left the swim leg in contention until just days prior. But there we were — age-group triathletes, fans and volunteers — mustering at the start.

Mine was the third wave, so there was little time to get nervous. I was running on six hours of fitful sleep less than twenty-four hours after arriving in a city some fifteen hundred miles from home, but still, as I stood ankle-deep in Blue Heron Lake in West Des Moines listening to the director count down, I found myself smiling. It was as beautiful a morning as I could remember. I had arrived at the start of one of my most ambitious undertakings — the unlikely paring of a triathlon and rock show — in one piece. This was it. Game on. The air horn sounded, and we were off.

Now, in my experience, it’s not the swim that sucks, it’s the swimmers. Left to my own devices — especially in a tranquil body of water like this one (not a churning, tidal body like the Hudson), I can swim a mile no sweat (well, little sweat anyway). But triathlon is the fastest growing sport in America. It’s full of all sorts of chuckleheads who think, ‘Yeah, I can do that’ regardless of their girth or experience.

Not to sound bitter. It just gets old pretty quickly when some goon in a $300 wetsuit keeps swimming over you, pulling at your feet or punching you in the head. And you can spot the out-of-their-depths dudes pretty quickly. They’re the ones clinging in panic to the first buoy, or doing the breast stroke by the second.

But hey, it’s water. We’re made of the stuff, but not made for the stuff. It’s tough to see, and tough to navigate. So I stayed on the inside, kept focussed on the buoys, and a clean, even stroke, a settled in. Roughly thirty minutes later, I was climbing out of the chop, ripping off my goggles and cap, and lumbering across the sand like a astronaut rediscovering gravity. 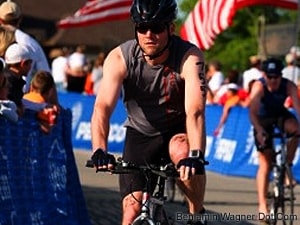 Twenty-four miles on the bike is really no big deal. The trick is saving enough quad strength for the 10k. Sunday, though, presented its own special challenge.

I’d planned on renting a bike all along. That is, until I called to rent said bike, and discovered that the limited number of tourists and cost of renters insurance meant that there wasn’t on rental in Des Moines. Plan B was to spam my friends. As always, Jason Walsmith came through. “I just had my Stumpjumper tuned,” he replied. “I can put slicks on it for you, but you’ll need to learn how to use SPD pedals.”

Having never ridden with let alone raced with SPD pedals, I was apprehensive for a second, but the bike sounded perfect. I’ve done three dozen tris on my Cannondale mountain bike. I didn’t wanna’ buck the trend one some tricked-out road bike now.

When I got to Des Moines and checked out Jason cherry-condition, slate-gray, circa-1991 Specialized Stumpjumper, though, there was one problem: the seat post was rusted into position. Now, I’m only 4-6″ taller than Jason, but that’s a few inches of leg extension (or “torque,” as I believe they call it). At 6pm the night before the race, though, whatcha’ gonna’ do? 6am morning of the race, you pull your Authentic Records jersey over your shoulders, strap on your buddy’s shoes, a climb aboard.

I had three primary thoughts on the ride:

1) “This bike rocks!” Seat height and resulting geometry (I was practically standing upright) notwithstanding, Jason’s Stumpjumper was perfect: light, rigid and efficient. On one downhill towards the end, I even managed to crack 30 mph.

2) “I thought there were corn fields here!” The first five miles were nothing but mall access roads and parking lots. We’re talking Cheesecake Factory, Anytown, USA, here. The streets were new, well-paved and fast though, so no complaints. And eventually, the mall gave way to a long strip of old road along the Racoon River that was plenty scenic.

Most triathlons have one transition area in which one racks the bike and changes in and out of shoes. Due to the last-minute nature of this race, though, it had two transitions. Which meant that, though I’d dropped the bike in T1 and my shoes in T2 the night before and done my best to remember where everything was overnight, by the time I hit T2 I was turned around. It took me three excruciating, infuriating minutes to find my shoes. Those were the moments I reminded myself (to no avail) that I wasn’t competing with anyone, I was there for fun and all that other stuff. Those were the moments that also lost me my 2:45:00 goal, but whatever.

The run. ‘This,’ I thought, ‘I can do.’ The real question was what pace I could sustain. Plus, it was getting hot. And the course was hilly, especially at the end. But I run every day. It’s one foot in front of the other. I settled in somewhere between 7:45-8:00, and tried to relax.

I imagine I looked determined or zoned out or insane, but I was smiling inside. The sky was blue, the air was crisp, and I could feel the finish line. When I weakened, I ran my thumb over the spot my wedding ring normally occupies (I learned my lesson about wearing a ring in open water at last week’s race). Towards the finish, I drove my canine teeth as deeply into my tongue as possible without breaking the skin (pain is a terrific motivator).

And soon enough, the finish was in sight. It was all flapping banners, blue bunting and sluggish runners around me as I strode past the grandstands. As I turned the final corner targeting (as always) my final victims (not difficult in this race; I passed five guys in the last 100 yards), I heard, “All the way from New York, New York…” threw the devil horns into the air and leapt across the finish.

A few minutes ago, I emailed the Authentic Records guys.

“Thanks for the jersey, and helping to make it all happen,” I wrote. “Now who’s with me for next year!?!”

This blog post is the last installment of my Des Moines Register’s Hy-Vee Triathlon training series.