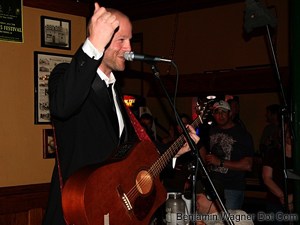 “It was a magical night,” she said. “It’s just doesn’t get much better than musicians in the community coming together to bring out the best in each other and their fans.”

“We decided to do this event at the very last minute and only had about a week to plan and promote it. Capital 106.3 really got behind the event, and due to their promotion the place was packed” said Jason Walsmith.

But the Des Moines-based label’s flood relief efforts don’t end there.Starting Tuesday, fans can download an eight-track “bootleg” recording of the show in exchange for a contribution of any amount — all of which will go to flood relief. Tracks include an all-star performance of The Nadas’ chestnut, “The River,” plus “Promise” from Wagner’s brand-new Authentic Records release, “The Invention Of Everything Else.”

“The Nadas are Iowa’s band, and Authentic is Iowa’s label,” Wagner said. “If someone was do something, it had to be us. ‘Cuz every little bit counts.”

Visit Authentic Records to do your part!

And click here to see photos from Sunday night’s event.