This Weekend? It’s All About Des Moines 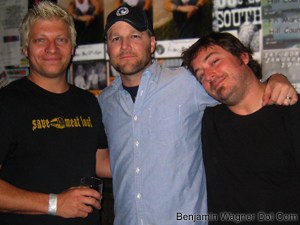 Holy moly, this thing’s blowin’ up!

What began as Jason Walsmith and my crazy idea (“Run the Des Moines Triathlon then play a rock show afterwards”) has grown to something truly epic.

Almost the entire Authentic Records roster has rallied together in response to the flood devastation sustained by the great state of Iowa to present “The Authentic Records’ Unsanctioned & Uncensored Triathlon After Party & Benefit” (or, as Nadas’ GM Dr. Tyler Uetz calls it, “ARUUHVTAPBS.”

Eight acts will be performing Sunday night at AK O’Connors in Beaverdale. And if I were a bettin’ man, I’d say there’ll be some great collaborations (I’ve already roped Mike Butterworth and Stephanie Walsmith into a few songs, and Josh Davis and Tony Bohnenkamp are next).

Check out this lineup:

I’m MCing the whole thing (‘cuz I like standing up in front of perfect stranger and asking them for money), and helming a silent auction chocked full of coolness. Check these items out:

So I depart Newark at 6am tomorrow morning. I arrive Des Moines at 9:30. Then it’s on.

I have to pick up my bike (which Jason has graciously outfitted with a fresh pair of slicks), grab my official Authentic Records Jersey (a one-of-a-kind, sleeveless gray Nike DryFit t-shirt that Mrs. Walsmith has tricked out with the aid of uber-cool DSM fashion purveyors, Smash), then head over to registration and pre-race briefing.

I’m due at KPTL 106.3 at 3pm CT at which time I’ll be playing new songs, talking up the benefit live and recording hits for Daniel Bosman’s Saturday night show, and Deeya’s Sunday mornign acoustic show. Then I’m going to sleep.

My age group (35-39, in which, incidently, cellist Patrick Riley will also be competing) starts the off-again, on-again swim portion of the Hy-Vee Triathlon at precisely 6:07. With any luck, I’ll be done two and a half hours later.

And then the real fun begins…

See ya’ when I get there!