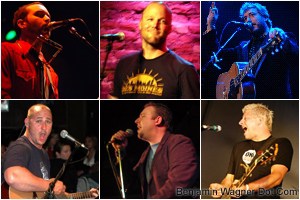 I got it into my head a few months ago that it would be a good idea to run the Hy-Vee Triathlon, and then play a rock show afterwards. And who were my Authentic Records label mates to disagree?

Little did we know that our beloved Hawkeye State would be submerged beneath one of the worst floods in its history. So now it’s official:

Proceeds from sales of my brand-new CD, “The Invention Of Everything Else,”, an Authentic Records silent auction, and forthcoming charity EP plus cash donations will all benefit the United Way of Central Iowa. Details:

Bidding starts at $20. If you can’t make the show but would like to bid one one of the items, please email me by 8pm CT Sunday, or you can simply make a monetary donation at Authentic Records Online.

What’s more, Sonic Factory Studios’ producer (and Nadas’ bassist) Jon Locker will be on hand to record an all-star version of The Nadas’ “The River” for immediate release as an online-only charity EP. We’ll have more information on that in the coming days.

Meanwhile, we hope to see you Sunday night for this most righteous, rockin’ and worthy event!