Shades Of Life Ringing Through My Open Ears 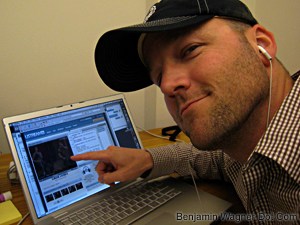 The band was recorded in Soho, overdubbed in Hell’s Kitchen, then mixed in Des Moines via Hollywood.

That photo of me pointing to my laptop? That’s Jon Locker and me recording Patrick Riley and Cecile Forsberg’s string parts for “The Invention Of Everything Else” — despite 1,689 miles in between the four of us.

See, the only way to to make a record while holding down a day job, directing a documentary, training for a triathlon: a whole bunch of ethernet.

I’ve already written all about how Jon and I mixed the album: he take a pass, upload an MP3, I’d listen and return my notes (hundreds and hundreds of words worth, mind you).

But this is something else completely.

See, Jon’s Sonic Factory Studios is equipped with a webcam that livestreams all studio activity. We’re talking about one of those little spherical things tucked in the corner of the studio. Two, actually (picture-in-picture, natch): one in the control room, and one in the studio. Partnered with AOL Instant Messenger, though, it makes for some powerful stuff.

I slip some iPod Earbuds into my ears, open another tab on my browser, and get to work. There’s Patrick and Cecile, and — because Jon’s routed the audio straight through his mixing board — I can hear ’em clear as day. I love what they’re doing (they’re recording “Promise” at the moment, as it ends up), but I want to hear just a hair more sustain in the verses. And so, 1, 689 miles west, I type a few lines into a box, and hear Jon translate on the other end.

In fact, you can watch a clip for yourself right here.

Now, I’ve had a Mac since I was seventeen-years-old, and graduated college just as the Internet was being born in earnest. I’m something of an early adopter. I dig technology, and like to try new things.

Still, sitting there in the basement of the Verna Fields building there on the Universal lot telling a couple of string players sitting in a recording studio 1,689 miles away blew my mind for a lot of reasons. It wasn’t just the technology (though that it’s so readily available is amazing). And it wasn’t the time and space shifting.

It was the Talking Heads factor. “How? How did I get here?” How did a kid born in Iowa City, Iowa, end up working for a huge music television channel in New York, New York, then co-produce a rock & roll record from Hollywood, California, with a pal back in Des Moines, Iowa? How!?!

However, whatever, and whyever, it ALL makes “The Invention Of Everything Else” a better record.

Then pick up a copy.