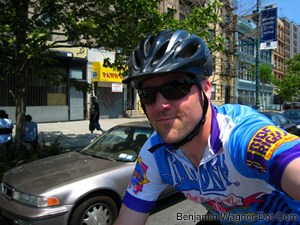 When I applied for the coveted Hy-Vee Triathlon Des Moines Register Blogger gig, I described myself as a “reluctant weekend warrior.”

Warrior might be a bit of a stretch. I’m more knave than night, more corporal than general.

But it is fairly apparent that the bulk of my distance training occurs on weekends.

Here’s a breakdown of the last seven days.

Sunday, June 1: Skipped my intended run on account of the fact that the Universal Studios fire was billowing smoke downwind; precisely where I’d run the entire week I was in LA. Plus, I had a twenty-hour day producing MTV News’ Movie Awards coverage ahead of me.

Monday, June 2: Woke up after four hours or deep sleep and ran 4 miles. Felt great. Ran into a bunch of colleagues in the lobby, which was good for bragging rights. Also: got a massage at the Beverly Wilshire spa, plus spent an hour in the steam room. The massage was great, but the steam was the best part. I had the place all to myself. It was dimly lit with blue tiles and tiny white lights — like stars — on the ceiling. Just outside the door, there was a basin of ice for a rub down, three types of aroma therapy wash clothes, plus a shower with three settings: Caribbean mist, Jungle Sunshower, and Atlantic Storm. I’ll be honest: I rocked all three. And I’ll admit it: totally decadent (and roughly $2 a minute, all said). But SO relaxing after another zany Movie Awards week.

Tuesday, June 3: Hit the Beverly Wilshire Hotel gym. No treadmill or bike, so did three sets of weights, sit-ups (on an exercise ball with a medicine ball behind my head) plus some leg stuff. The gym was amazing. In addition to having Gatorade, cranberry and orange juice on ice, they had these great little blueberry and bran muffins. Plus, I had the place to myself.

Wednesday, June 4: The terrorists in”Die Hard” take over a building called Nakatomi Plaza. It’s actually Fox Plaza in Century City. And when I realized my hotel was within spitting distance, I had to make a pilgrimage. So I ran the roughly 5 miles there-and-back between afternoon meetings. Also, passed the country club Axl Foley (Eddie Murphy) crashes in “Beverly Hills Cop.” Gotta’ love seeing LA through the eyes of a former video store clerk.

Saturday, June 7: 3 mile run in Central Park. Pretty weak showing, especially as my wife had a 10k women-only race. What can I say. It was hot. I was tired.

Sunday, June 8: 20 mile ride: North to George Washington Bridge, down the west side, across 125th Street past The Apollo Theater, south on Malcolm X Boulevard, across the top of Central Park, down Fifth Avenue, then back into Central Park (on account of Fifth Avenue being closed below 89th Street for the Puerto Rican Day Parade), down the west side, out on Sixth Avenue, south through Times Square and back home on Tenth Avenue.

You may notice a significant lack of pool time. Frankly, I swam twice in the last three months. Pools are tough to come by in New York City. And though there are some great open water races in the Hudson River (yes, it’s true), they don’t begin in earnest until next week. So I’ll count on my weights, and the fates, and the pretty decent stroke I picked up on swim team as a kid.

Anyway, as I said to Abbi this morning, there’s not much I can do to prepare at this point. I’m ready, or I’m not.