Daylight Is Coming (And No One Is Watching But Me) 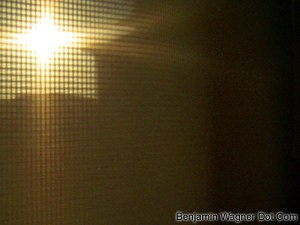 In 1910, director D.W. Griffith and his acting troop (Lillian Gish, Mary Pickford, Lionel Barrymore, amongst others) were sent west by the Biograph Company. There, in a small village named after landowner Harvey Wilcox’s summer home, Griffith filmed the first movie ever shot in Hollywood, “In Old California.”

Movie-makers began heading west in droves, largely to avoid fees imposed by Thomas Edison, who owned patents on the movie-making process, but moreover by the the mild climate, varied scenery, and reliable sunlight.

Though Warner Bros, Universal, Fox and Sony have left Paramount as the sole studio left in Hollywood, the industry has, of course, blossomed into a global cultural and financial juggernaut, raking in $32.4B in US and international ticket sales alone last year. Factor in DVD sales, licensing, and the vast and varied micro-economies that support this Great American Business (agents, managers, cameras, lighting, software), and you’re talking about one of the nation’s leading export. Which I find fascinating, as — especially given the decline of actual celluloid — there is no tangible product.

In Hollywood, they make billions on fantasy.

Little wonder, too. It is a fantastical place. In the ten days I spent there over the course of the last two weeks, not one raindrop fell. To the contrary, the sky was a fierce, robin’s egg blue. The sun was warm, while the air was cool and crisp, and usually carried with it the whiff of flowers.

We criss-crossed Los Angeles this week, visiting all five major studios. Of course, I witnessed the Universal Studios fire first hand. I saw the famous Warner Bros water tower (watch the opening credits to “Batman” again; you’ll see what I mean), Paramount’s filming tank (where they shot the boat rescue in “Patriot Games,” amongst other ocean scenes), and a huge “Star Wars” sound stage at Fox. And in total, I spotted three New York Street scenes at Fox, Sony and Universal (which was, sadly, smouldering).

Mostly, though, I found myself in board rooms watching “sizzle reels” and walking through PowerPoints.

Still, every night, as I collapsed onto my bed at the Beverly Wilshire (where, I was reminded, Richard Gere and Julia Roberts shot their “Pretty Woman” dalliances), I had to laugh. This once unimaginable, other-worldly place was now unmasked, familiar, and real. What’s more, I had a role — albeit a bit part — to play here.

And every morning, as I pulled back the curtains and looked out over Rodeo Drive, the Universal Talent and William Morris Agencies, I marveled at the light. Forget the billions of dollars. Forget the hubris, excess, and narcissism. Forget the valet parking, the lap dogs barking, the Phantoms, Jags, and GranTurismos.

It’s the light, dummy: crisp and clear, bright and unfettered, and — above all — reliable.

The rest is just a mirage.