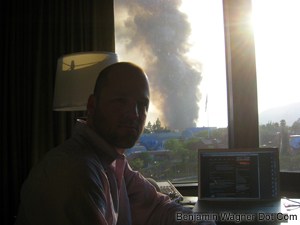 I woke to the sound of a helicopter swooping what sounded like mere feet overhead.

Moving towards the window of my hotel room, a column of black smoke billowed where the mountains used to be, then flattened like an anvil just a few hundred feet overhead. The air was cast a gauzy, grayish-orange. Four helicopters circled overhead, alternately diving into the valley beyond.

‘That looks like it’s on the lot,’ I thought.

I worked a mental map in my head, imagining the five-minute cart ride from our offices on the back of the hill to The Gibson Ampitheater high above the back lot. The fire appeared to be somewhere right in-between, though — for what it’s worth — blowing southward.

I turned on the TV, and began scanning the channels. Local television wasn’t on the scene yet, but Fox News was, and the pictures were dramatic.

Entire soundstages were ablaze, high flames and thick smoke pouring out of the rooftops. Through the smoke, I could spot the “Back to the Future” town square, and famed New York Street set, both criss-crossed with fire hoses.

Reports indicated that the fire broke out just before 5:00 a.m. PT. Filming may have been going on at the time, and at least one explosion had been reported. Information varied as to whether the nearly 100 years worth of celluloid in Universal Stuidos’ Film Vault — from Lan Chaney’s “Phantom of the Opera,” Alfred Hitchcock’s “Psycho,” “King Kong,” “Frankenstein” and more — were threatened.

“The smoke is visible from the entire L.A. basin. Firefighters are coming in from as far as Covina. This thing is going to be burning well into the afternoon.”

On NBC-4, Elliot Sekuler, Universal Studios’ Communications Director, while conceding that he is watching the same footage as the rest of us, reports that “All the rides and attractions will be open today.”

From Universal City Hilton Room 1065, it looks and sounds a little like Vietnam to me. I’m not sure Mr. Sekuler might not be making some revisions to his initial statement.

For the moment, though, the fire appears not to threaten our offices, or the amphitheater, so all systems are go. 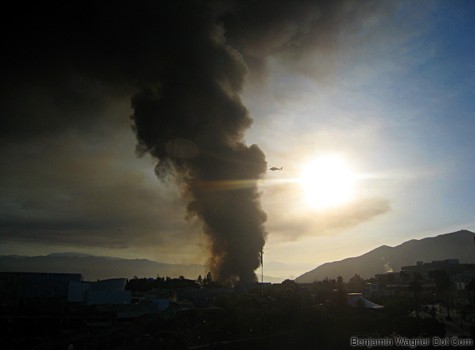 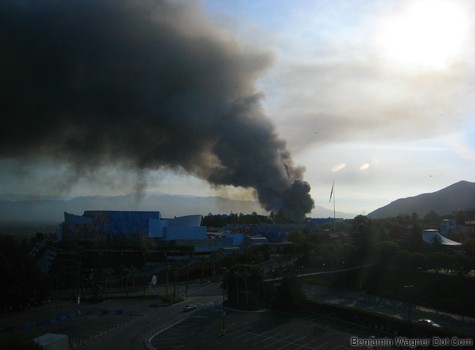 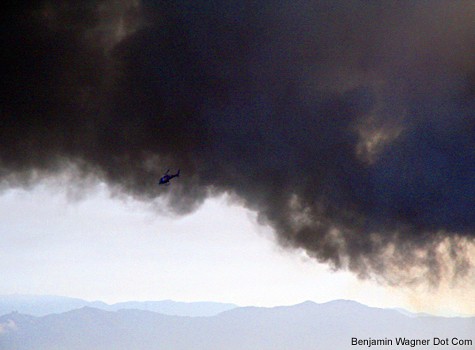