Viva La Vida (Or, Death And All His Friends) 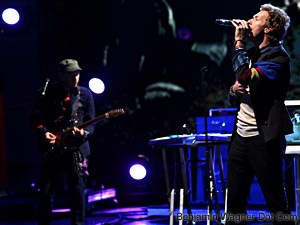 I’m sitting next to Charlize Theron in the fifth row of The Gibson Amphitheater when the string section walks in.

Coldplay, a little matchy-match in their quasi-revolutionary, epilette-laden outfits, tear into the hook: four synthy chords and a house-inspired beat. Behind them, naked, desaturated Romanesque soldiers storm an ancient gate. The stage, once cast is deep blue, turns a fierce red.

Drummer Will Champion lays his mallet into the deep, copper kettles, then strikes a small church bell.

Chris Martin paces the stage on the balls of his feet, straining his neck towards the high notes.

Before the last chord rings out, MTV Movie Awards Executive Producer Mark Burnette swoops down the aisle, making a seersucker jacket (collar up, of course), ripped jeans and Chucks punctuated by one of those tattered Israeli scarfs look pretty rock ‘n roll. Nine colleagues follow him, crowding around Martin in a semi-circle.

An hour later, the entire stage has been re-arranged.

Which is roughly when it occurred to me that I am releasing my new CD, “The Invention Of Everything Else,” on the same day Coldplay is releasing its “Viva La Vida (Or, Death And All His Friends).”

I share this insight with my colleagues, reporter James Montgomary and producer CJ Smith, excuse myself, turn towards Ms. Theron’s placeholder image. I brush past her, break through the doors, and make way into the California sun.