Without Love It Ain’t Much 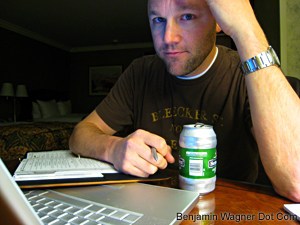 Ok, so here’s my super-glamorous life on location at the 2008 MTV Movie Awards, part two.

‘Cuz it’s like Comedy Central up in here; one comedic elephant-in-the-room after another. Which explains why I’m still tethered to my laptop at 10:29.

Not that it’s a total loss. I’m watching “Juno,” like, a year after everyone else. (I got choked up when Jennifer Garner hugged Jason Bateman and it dawned on me that I still have a week to go before I’m home with Abbi.) And I just had a delicious chicken tortilla salad. And I have a bowl of strawberries for desert because Rosie, the woman who took my room service order here at Hilton Universal City, talked me into a healthy desert (the apple pie would’ve been far better).

So in lieu of a full-fledged update on life in the basement of the Universal back lot, here’s an excerpt of what we’ve been up to here courtesy of my other day job, The MTV Newsroom Blog:

All-American Reject Tyson Ritter took us to celebrity hiking hot spot, Runyon Canyon to give us the (pooper) scoop(er) on “House Bunny.”

Verne Troyer tought our own Top Model, Kim Stolz, the art of living large in L.A.

We snuck these two Movie Award shorts out of the edit.

Josh wrestled “Transformers 2” casting news out of The Rocker and Rainn Wilson.

Tim caught up with “The Foot Fist Way” star Danny McBride, writer/director Jody Hill, and a little-known producer named Will Ferrell. (Tim says that punk’s not going anywhere, and fast.)

We got mani/pedis with “House Bunny” stars Anna Faris, Emma Stone, and Katharine McPhee. (Tyson Ritter’s in that too.)

Kim began soliciting questions for “Twilight” stars Robert Pattinson and Kristen Stewart. Because you crazy kids love you some “Twilight.”

And while you’re lending a hand, she also needs your help picking her red carpet dress.

All those celebrities notwithstanding, here’s the best part of every day. As I’m running down the hill for my morning jog (I have a triathlon in, like, three weeks!), I pass my colleague Jim who’s riding the $250 bike he bought for the week up the hill. When I get back, I pass my colleague (boss, actually) Ocean who’s just getting in from surfing in Santa Monica.

That’s it. That’s the fun part.