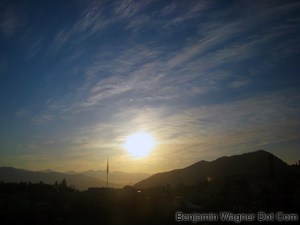 Invariably, every time an event like the 2008 MTV Movie Awards pops up, I’m on the receiving end of all sorts of comments about how cool, glamourous or sexy my job is.

So let me set the record straight.

True, I woke to the sun rising over Mountain Wilson. And yes, the air smells like flowers.

True, I am working on the back lot of Hollywood’s second-oldest studio (Jack, Harry and Albert Warner — the Warner Bros. — founded their soon-to-be movie empire in April, 1923, just three few week’s prior to Carl Laemmle’s Universal Film Manufacturing Company). Desperate Housewives is shooting next door. Alfred Hitchcock’s “Psycho” house is a three-minute golf cart ride away. And there’s a Hot Topic at the Universal City Walk.

And I’ll grant you that the guide books would have you believe I’m in sunny, glamourous Hollywood.

The fact is, though, we’re in The Valley. It’s more “Pulp Fiction” than “Sunset Boulevard,” more “Boogie Nights” than “A Night At The Roxbury,” more “Brady Bunch” than “Beverly Hills Cop.” This is the place of strip malls, radioactive suitcases and repo men, not red carpets, paparazzi and premieres. Close, but not quite. 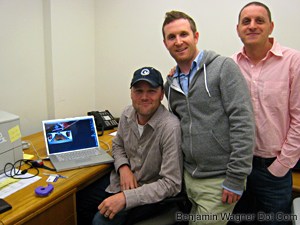 Universal City (which, were it not for the studio itself, would be Burbank) is all “Valley Girl” and Vivid Video (in fact, The Nation’s Foremost Flesh Purveyor was within view of my first room here at the Hilton Universal City — the one with a still-fresh pool of purple vomit between the queen-sized beds).

My MTV News colleagues and me (that’s me, Supervising Producer Ryan Kroft and Vice President Jim Fraenkel in our subterranean hovel), though, are crammed into cold, barren, fluorescent-lit, off-white basement crypts. I hear the sun is shining outside, and the commissary across the street is lovely — if only I could get out of my seat long enough to grab lunch.

My primary objective here is to assure that MTV News Online is in synch with MTV News on-air. When, for example, our own Tim Kash bags a news brief in the In-N-Out Burger drive-thru, it’s my job to be sure a blog entry makes it onto the site. Or, rather, sites. Where MTV News was three entities when I started in 1996 (on-air, online and AOL), we now count more than thirty “platforms.” From cell phones to blogs to syndication partners, our job is to be everywhere all the time. By Sunday’s awards, we’ll have posted some 100 articles, blog posts and video segments.

Meanwhile, just past the “Jaws” stop on the tram tour, MTV is putting together the 2008 MTV Movie Awards. For now, there’s little more than a credentials tent, some satellite trucks, production trailers, and — according to my pal (and fellow ACK appreciator) Craig Goldstein (with whom I stood on a bridge in Miami drunkenly facing down Hurricane Katrina before she turned truly ugly) — some 4000 feet of ethernet cable connecting it all. Construction on the red carpet (gold, actually) begins tomorrow. We’ll be rockin’ come Sunday. I may see it for, oh, twenty minutes or so.

Such is my lush life. 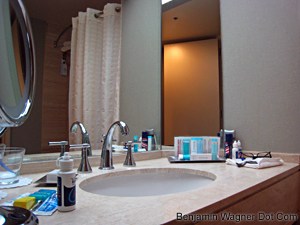 Now, that said, granted a few concessions (like my wife’s presence), I think I could live in a hotel room forever. I moved my desk to face the mountains. I have two beds, in the events I tire of one of them.

And all things considered, I could get used to coming home to fresh towels, dry cleaning in the closet, a made bed, and toiletries arranged just so (Can you see that!?! My contact case is in perfect geometry with the washcloth!).

So if you’ll excuse me, I have four hours of sleep to catch before I wake up at 4 a.m. Heaven forbid my body adjust to Pacific Time.