Sing To Keep Your Demons At Bay 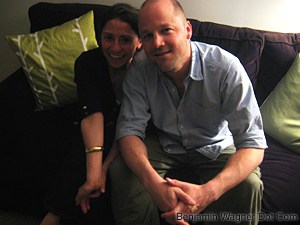 Good thing Jamie Leonhart told me she taught voice after I roped her into singing a few songs with me for “The Invention Of Everything Else” (due June 18th from Authentic Records!); had I known in advance, I might not have had the nerve to ask.

I first came to know of Miss Leonhart as we prepared last winter’s “A Family Holiday” Benefit CD. Her’s was the smashing duet with former Undisputed Heavyweight, Mr. Casey Shea, a totally-classic yet thoroughly-modern rendition of “Baby, It’s Cold Outside.” It was the sound of two greats tossing off a performance as warm as cocoa after a day of sledding. Jamie’s voice was resonant, playful and lived-in like few of her contemporaries.

A few days prior to the benefit’s release, Tony insisted we catch her show at Rockwood Music Hall. She and husband Michael were the real deal, popping from piano to guitar to harmonium, and from jazz to rock to folk, all effortlessly and with grace. It was a thing to see (and envy).

And so, when it dawned on me to cover John Prine’s “Killing The Blues,” I immediately thought of Jamie.

God bless her, one month of periodic pen pal-ing later, there she was at my doorstep. Her harmonium had sprung a leak, but her vocal chords were ready. Instead of jumping into work, though, we sat on my patio and talked a bit.

Which is when I found she taught voice.

A bit of context. I don’t remember discovering that I could sing. I just always could, and people always responded positively, so I kept doing it. So it may not surprise you to learn that I’ve had very, very little vocal training. With the exception of a few hours in high school preparing for the lead in “Pippin,” my voice pretty much just does whatever it does by itself. I don’t have any idea what controls it, or how it stays on pitch or forms some of the sounds it forms, it just does. I don’t know how to sing right, I just know when it sounds wrong. Which is no way to make a career (or sideline, as the case may be).

I don’t lose a ton of sleep over my lack of training, but there are times when I’m sensitive to my weaknesses, like the occasional sharp or flat, or the fact that I have no way of describing what I’m doing or replicating something twice. Which is doubly awkward around a woman who has breath control like an opera singer, but a voice like a jazz chanteuse.

I know I wrote that one-take sessions only happen in “Fame” and “Once,” but I was wrong. Jamie jumped in the closet, got some levels in her cans, and nailed it song after song. In addition to “Killing The Blues” (in which I asked Jon to mix her like “some sort of apparition floating above the song and its meaning”), Jamie sings on “Promise” (I realized she’s proxy for the object of the song’s affection, not to mention one of the firs positive manifestations of the feminine in fifteen years of songwriting) and “Breathe In” (injecting a little Middle Eastern flavor into the choruses).

What’s more, though, Jamie’s totally together, totally chill,and totally sweet. When she wrapped her parts in well under an hour, she then shared a good portion of her Saturday night sipping margaritas and talking politics, culture and life with Abbi and me. After she left, I told Abbi, “People like Jamie are the reason I came to New York City in the first place.”

As I mixed down her takes afterwards, I laughed at our mid-song banter. Here I was self-deprecating at every turn.

“Ooooh… that was a clunker note.”

But Jamie wasn’t having any of it. She reversed me on every point, saying only sweet, supportive and positive things. And then, when the appointed time came, she opened her mouth and unleashed some sort of velvety, vocal heaven. And everything was better for it: my song, my voice, and me.

Wait ’til you hear.