Mixing “The Invention Of Everything Else” 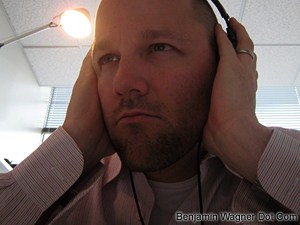 Jon Locker, bless his heart, seems to be remaining calm.

The Nadas’ bassist (and bonafide producer) is mixing my new record, “The Invention Of Everything Else” (due June 18th from Authentic Records!) at his Sonic Factory Studios in Des Moines.

As you might guess, it’s a not an assignment to be taken lightly, as my OCD manifest pretty significantly when my face is on the thing. Which it will be, when I get around to that part.

For now, though, the process involves notes, and lots of them. Jon uploads a few mixes at a time to his FTP site, I download ’em, strap on my headphones, push play, and close my eyes. Then I listen again, jotting down notes about stereo separation, levels and the like.

I imagine these notes are a bit detailed for Jon’s liking, and I wouldn’t blame him. In fact, when I discovered today that there’s a live stream of the studio, and I clicked on it and heard him joking with the guys, I quit out almost immediately; I didn’t want to hear him mock my most recent novella. Because unfortunately for Jon, I know just enough about ProTools to be dangerous, but not enough to be great. Together, though, we sound pretty bad ass.

The mixes I’ve heard so far — five of the intended thirteen tracks (10 on the CD, three online-only bonus tracks) — sound amazing. Insane as I may be making him, Jon’s really killin’ it. By the end of this weekend, he’ll have all of my rough mixes. By June 1, the whole thing’ll be shipped off to be mastered in Dallas.

Here, then, for your obsessive compulsive enjoyment, is a copy of yesterday’s mix notes (as well as an insight into the track list):

HOLY SHITE, Jon, these mixes sound amazing!!! Awesome work on vocals. Drums sound great. It sounds like a record! Seriously, awesome. :) Thanks, dude. With these notes, I think this batch’ll be all set!!!

GIVING UP THE GHOST: AMAZING! Sounds summery, huh?
1- Vox: Feels like the verse and chorus levels are still a bit off
2- Tambourine: 10% less overall
3- Solo: 5% less overall? Feels a little out of the blue.
4- Maybe more reverb on vox so that solo doesn’t sound too out of the blue?
5- Keys: 10% less overall
6- No “1,2,3,4” at beginning (you probably knew that).
7- Can you make that keyboard fade at end of break into last chorus a little smoother?

TRYING TO TELL YOU: F*ckin’ killer. Almost done.
1- Can you mute Ross’ guitar in the intro?
2- Can you go further on that compressed-drum sound idea? Make it even more AM-radio sounding?

PROMISE: Be patient with me on this one; I wrote it for Abbi and my pal Chris played it at our wedding ceremony. :) It’s important. Drums and vocals sound great. Chris’ solo works! Key pads work! But…
1- There are two arpeggiated guitars in verses, can they be at about 20% left and right and then…
2- The strum guitar that’s currently on the right should be more centered and half as loud (let the keys and arpeggiation carry the tune.
3- No “1,2,3,4” at beginning (you probably knew that).
4- Sounds like Tony’s bass is making weird string sounds in chorus. Anything you can do about that?

CHASING SOMETHING: 99% done!
1- Love Ross’ sounds! Let’s save em for after first chorus. And have em span the whole space (they’re panned pretty right).
2- Can you put all of the instruments in the same sonic space as Ross? More subtly, but similar?

WONDERWALL: You made it sound awesome! Love the percussive choruses.
1- Do you think the first note (the low E string) is weird? Should I re-track that? Can you ProTool it?
2- Can you slip the bass about 15% more to the left (sounds too right to me)
3- Do you think the last three syllables of the last backing vocal (“wonder wa-a-a”) sound sharp? Maybe mute em? And main vox can sing last line (“You’re my wonderwall”) solo.
4- Fade that beeyatch. Maybe from 330-345?

BOYS OF SUMMER: Wow! You salvaged it! No one’ll ever know we were half in the bag and tracked it at midnight!
1- You sure about that one shaker (the overhead)? Maybe 10% less?
2- Drums seem wicked loud, like 10% too loud.
3- You can remove my background vocal screaming (at 1:01-1:11); I was just goofing around. :)
4- Vocals seems too close, too clean
5- Backing vocals 10% quieter and 10% more centered
6- Will you make Tambourine 10% quieter and exactly opposite of backing vox (so on left)?
7- No “1,2,3,4” at beginning (you probably knew that, ha ha).
8- Like your breakdown section! Can you keep the original acoustic line, then use that affect line ring behind it about 20% quieter (more subtle)?

Stay tuned for how just how the whole thing turns out…