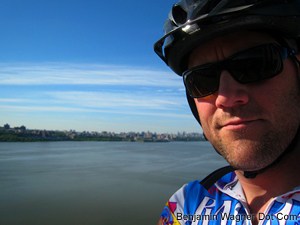 The Bridge was opened for traffic on October 24, 1931. It spans some 4,760 feet from the sites of Fort Washington (on the New York side) and Fort Lee (in New Jersey), fortified positions used by General Washington and his American forces in his unsuccessful attempt to deter the British occupation of New York City during the American Revolutionary War. The bridge’s great shadow marks the route by which Washington and his troops fled the British in 1776.

I’ll never forget the first time I crossed that bridge. It was 1992, the dark winter of my senior year at college. My band, Smokey Junglefrog (who, incidently, my four-year-old nephew Ethan just discovered with some help from his dad), was playing its first (and last, as it ends up) New York City gig at The Nightingale (birthplace of Spin Doctors, Blues Traveler, and Joan Osbourne). Drummer Tod “Fish” Salmonson was at the wheel of my Chevy Celebrity; I was too anxious to drive. And so I was afforded the best view in the house, er, car, facing downtown as we crossed eastward from New Jersey.

Speeding along on that steel perch some 200 feet above the Hudson River, the island of Manhattan spread before me like a limitless, dystopic Oz. For miles below me, all I could see were the great glass, concrete and stone spires of commerce. My vantage point was half Snake Pliskin, half Little Orphan Annie. I didn’t know whether to flee, or break out in song. I was terrified, and thrilled. Fish and I opted for song, breaking into Frank Sinatra’s “New York, New York” before falling silent in the crush of Midtown traffic.

Just three years later, my brother, Christofer, and I moved to The City from Saratoga Springs, New York. Again, we crossed the George Washington Bridge. And again, I was terrified and thrilled. This time, it was for keeps. I wasn’t sure I could make it here. But if I could…

I was reading James Baldwin’s “Another Country” that spring, a sordid tale of sex, drugs and race relations amidst the West Village jazz scene. In the first third of the novel, drummer Rufus Scott leaps to his death from the George Washington Bridge. As a young, struggling musician myself, the image struck me, and stuck.

Thirteen years later, the GWB has become a frequent and welcome part of my life. The edges of New York City have become beautifully groomed greenbelts, affording everyone access to the river. The roughly eighteen-mile round trip from my apartment to the bridge has become a staple of my shorter training rides. Chris and I like to take Ethan to the fabled Little Red Lighthouse just below its eastern tower. And for longer trips along the Palisades and beyond to Piermont, New York, the GWB is our escape hatch.

Rare is the crossing, though, that I don’t stop mid-span, stare out at The City, and think of all these things. It is an awesome place, this massive steel and concrete strip in the sky. It’s the edge of something great, connecting the island to the mainland, and binding together earth, air and water. Even as I am struck by vertigo looking straight down to the gently rolling current below, and even as I imagine that fall in the pit of my stomach, I feel alive there.