Ten Reasons I Should Have Taken Up Needlepoint Instead 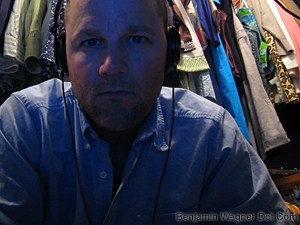 The last few weeks in the studio have been sort of painful. It all came to a bit of a head last night when I found myself preparing dinner between takes and swearing under my breath — well, maybe not so much “under.”

Abbi said, “I’ve never seen you so moody!” Which was a really sweet way of telling me to pull my shit together.

So I was tracking vocals just now thinking about why the recording of “The Invention Of Everything Else” has been so difficult, my obvious and tiresomely over-documented over-commitment notwithstanding. Here are ten reasons, in no particular order.

1- I’ve never self-produced an entire album. The closest I came was “The Desert Star EP” which made me feel the same way: insane. This is twice as many songs, and three times as many tracks.

2- There’s no producer or engineer to say, “Enough already; you got it!”. So I just keep trying for better and better takes.

3- I have virtually no musical or vocal training at all, so I just poke around my muscle memory and try and find some sort of sweet spot that I couldn’t identify if I tried, but always know if its off.

4- The arrangement and instrumentation behind this set of songs affords me very little place to hide. There’s virtually no electric guitars, and the drums are clean and neat (not huge and bombastic), so I hear every little sharp, flat, creak and groan.

5- Moreover, for some reason, many of these songs have serious high notes, and some super-tiny little “American Idol” style vocal flourishes (let me hit “super-tiny little” again before we move on), the landing for which I don’t always stick.

7-I’ve released nearly twenty albums (may of which are long since out of print) since my high school band, Underground, dropped “Dark Globe” in 1989. And none of them have been perfect. There are moments when this one threatens it, but then I spot a beat out of place, or a noisy string, or a creaky chair, or a sqeaky vocal. So I keep fine-tuning and tweaking, trying to buff and polish everything up.

Worse, there’s the distinct sense that this is my last album. As such, I’d really like it to be great. Most great albums – “Pet Sounds,” “Dark Side of the Moon,” “Murmur,” “Exile on Main Street,” “Let It Bleed” – were made with massive budgets in massive studios where the sole objective of every day was make a great record. My record? Well, wedged in between everything else. But the pressure’s still there, and it makes me nuts.

8- Remember how U2 booked the PopMart tour before finishing “Pop,” then years later — after disappointing sales and reviews — admitted that the pressure affected their creative process? Well, I don’t have much of a tour planned, but the release date (June 18th) is in ink, and approaching quickly. I’m sure that sales and reviews will be positive (ha ha), but I’m definitely feeling it.

9- My recording environment is bone dry. That is, I’m not tracking to reverb as many studios do. There’s no forgiveness, no sympathetic waves in a bone-dry recording. Which is why Jon Locker will add reverb. For now, though, I hear everything.

10- I mentioned that I’m overdubbing in my walk-in closet, right?

Of course, the results will speak for themselves. And best as I can tell at this point, “The Invention Of Everything Else” is going to turn out just fine.

In fact, it sounds more like me — that is, how I imagine my music manifesting these days: acoustic, melodic, cathartic — than anything I’ve done.

Come to think of it, it’s like the Cosmopolitan or Glamour version of me; I’m the dude on the cover, sure, only the blemishes have been Photoshopped out.

Which, as a permanent document goes, is probably best.