Studio Chicanery (Or, My Weekend In The Closet With Chris) 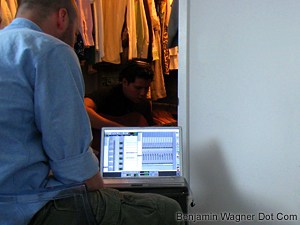 Just how long does it take to nail a guitar solo?

Even if you’re only a casual Rolling Stone or Spin reader, you’ve probably read the same B.S. I have about first takes. Yunno, Slash is talking about the “Sweet Child Of Mine” solo on “Appetite For Destruction” and he’s all like, “Yeah we just rolled tape and nailed it on the first pass.”

It happens… sometimes. Over the course of fifteen records, I can count such occurrences on exactly one finger.

I wrote a simple little song called “Glider” during the (drug addled) recording of 1996’s “Out Of Your Head” that we recorded in one pass. In fact, if you listen closely at the end, you can hear an airplane fly over the studio which (in our stupor) we thought was genius. (I never really considered it until now, but the lyrics and lackadaisical recording aptly characterize that entire era: “Time spent gazing at a circular flight / Is squandered away.”)

In my experience, unless you have the resources to spend months in the studio rolling tape 24/7, the process is far more laborious.

As Chris Abad and I were reminded this weekend.

Now, calling my walk-in closet a studio is a stretch to begin with. But for all intents and purposes, the proof is in the pudding. The tracks we’ve recorded there for “The Invention of Everything Else” (due June 18th on Authentic Records!) sound great. But that doesn’t mean they went down easily.

It’s no secret that I wasn’t terribly pleased with some of the tracking or mixing of “Heartland.” It was cobbled together in two studios and mixed at a third. And it sounds like it. Guitars come in from all over the place. Solos are odd. Vocal levels are weird.

So I’ve been extra careful to nail my overdubs. Example: My primary guitar style is strumming, which gets garbled pretty quickly when you have a few different strum tracks. So I’ve been sure my strokes have been in synch. You won’t notice, but that’s the point.

This weekend, Chris Abad and I wrestled the “Giving Up The Ghost” solo for an hour. Imagine: Chris jammed into my hot little closet while I give direction from just outside the door — nebulous stuff like, “Do the triple thing again, but then find a way out that builds to the last verse.” Real helpful stuff.

At one point, when we’ve literally tracked the section thirty times, sweats beading down his furrowed brow, and we both know he’s got to get home to tend to his wife’s fever, I say, “I’m pretty sure this closet’s build over an ancient Indian burial ground.” It’s frustrating stuff.

Singer/songwriter Andrew Bird summarizes the process and its challenges pretty succinctly in The New York Times’ “Measure For Measure” blog.

“I have this intense aversion to canned emotion,” he says. “Yet that’s exactly what recording is: a reconstituted, canned facsimile of a performance.”

In the studio, a number of things can conspire to turn the natural act of making music into an awkward dance. First there is no audience, no one to impress. Second is the temptation to be too careful, to isolate every sound and not let it mingle with other sounds. The third deals with the voice, the most personal and vulnerable instrument. Recording vocals can be fraught with aural illusions akin to the weirdness of hearing your own voice on your answering machine. “That’s not me, is it?” You sing into a device that converts your voice into an electric current, which travels through wires and gadgets to a tape machine. You scrutinize that voice, make adjustments to your proximity to the microphone, switching between “head voice” and “chest voice.” When you belt it out it almost always sounds thin and small but when you sing quiet, close and intimate it sounds thick, warm and huge –but then it can lose gusto. Recording is full of counterintuitive stuff like this, so you can see how quickly the original sentiment of a song can get derailed.

I listened to a scratch mix of “Giving Up The Ghost” this morning. It’s the first track on the CD (due June 18th on Authentic Records!), so it’s gotta’ sound great. It still needs backup vocals and keyboards, still, it already sounds great. Best part? Chris’ solo. I emailed him as I walked down Tenth Avenue.

“Your ‘Ghost’ solo is superawesome.”