The Dirty Life And Times Of Warren Zevon 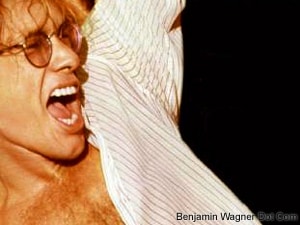 I’m pretty sure I’m not a tortured artist, though I may be a masochist.

Most readers flock to best sellers, pap like Joseph Hellerman, Dean Koontz, or Scott Turow. Nothing wrong with that; I enjoy a blockbuster page-turner like the guy in the next seat on the plane.

My pap, though, is the rock bio.

Last year, I devoured “U2: At the End of the World” by Bill Flanagan (a CBS Sunday Morning contributor and MTV SVP over whom I emphatically and somewhat embarrassingly gushed when I bumped into him in an elevator recently).

A few weeks ago, I tore through Dean Wareham’s “Black Postcards: A Rock & Roll Romance.”

Yesterday, I reluctantly finished “The Dirty Life And Times Of Warren Zevon,” an oral history compiled by the late singer/songwriter’s ex-wife. In addition to 300+ pages of chronologically ordered remembrances from family, friends like Jackson Brown and peers like Bruce Springsteen, the book excerpts Zevon’s own journals. The result is a painful, compelling read.

Unlike U2 or Luna (or even Semisonic, whose drummer, Jacob Slichter wrote the great “So You Want To Be A Rock & Roll Star?”), I knew very little about Zevon when I began the book. In fact, I think it all added up to just a handful of songs: “Werewolves Of London” (of course), “Lawyers, Guns & Money,” “Tenderness On the Block” and one I covered a few summers ago, “The French Inhaler.”

From covering “The French Inhaler” alone, it was apparent that the guy had a gift for both musical and lyrical composition. It was tough for me to work out the melody, and even more difficult to figure out the chords. Moreover, though, it was clear that his sensibilities were a bit off-center.

Whether he’s writing about himself here or not, an author is always implicated by his text. He’s clearly wrestling some demons here: malaise, success, integrity. Ends up, he was wrestling with all that, and a whole lot more.

By all accounts, Warren Zevon was a musical genius held in high regard by many. Springsteen I would rarely see Warren that he hadn’t written something that I wished in another lifetime I’d written.” Jackson Browne said, he “said the things I wish I could say.” Gore Vidal said, “There was simply no one else writing like him at the time.”

Far more often then not, though, he was a complete jerk.

April 22, 1985
Checked out of Cedars [Sinai Hospital] early afternoon. Went to my room at Le Dafy. Made high priced ($300) call girl after passing on two… she left 5ish. Flew to Rochester.

July 9, 1992
… Boring show. Good fuck afterwards… then she left so I could pack… total class act that girl.

January 29, 1995
…David Keith’s Superbowl party. Steak and strippers — a few lapdances (one felt obliged)… went to Annette’s and made love.

He gobbled pills, snorted coke, polished off bottles of vodka before noon, alienated his kids, obsessed over minutia (he purchased thousands of gray Calvin Klein t-shirts in his 56 years, many of which were still in their original packaging when he died), and collected and disposed of lovers like dirty laundry.

And yet, throughout the books 431 page arc, I found myself drawn to the man if not just sympathetically, then maybe even empathically. I’m not sure there was any way out for him; he was hooked on turmoil to fuel his art.

And I’m not sure that some of those more base behaviors — the addictive personality, the womanizing, the morose, obsessive compulsive — are not just below the surface of many of us.

Or maybe just me.

I may have passed through some of it, but it’s there. It happened.

With Zevon, though, one gets the sense he couldn’t move through it. Or he simply wouldn’t. He was too weak, too needy, to sensitive. Or maybe just too lazy.

So it was a dirty life. And a sad one. And ends as sloppily as it began, in an apartment strewn with empty liquor bottles or closets full of pornography (self-produced, natch). But it also ends with a flourish of creative energy, a last gasp of exposition (or explanation).

Am I a tortured artist? Maybe just a little bit. I know those thoughts. I hear those voices. But — better or worse — the volume’s turned down. I hear other things. I see other possibilities.

Whatever it is, it is; there are no innocent bystanders here.