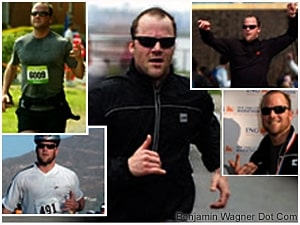 Two weeks ago, I decided it would be fun to jog up then sprint down a mountain above Los Angeles just two hours before boarding the red eye to New York, and two days before the Brooklyn Half Marathon.

And yesterday, I set out for a quick five-miler having not eaten dinner or breakfast, with no money in my pocket, then got carried away and stretched the run to eleven miles.

The ramifications for both were minor. Two weeks ago, I limped around with sore quads after siezing up on that cramped overnight flight. Yesterday, I drank a lot of Gatorade and popped a few Advil.

Of course, I’ve suffered worse injuries in these 36 years of largely self-coached athelticism. Here, then, are my “Top Five Boneheaded Sports-Related Injuries.”

5. The ’82 Slider. It was the first game of my first year of fast pitch baseball. I was on second base, when Mike Jeffries popped a solid shot to right field. The third base coach waved me around< so I dug my cleats into the dirt, and dashed for home. As I slid into home (possibly the first time I'd ever really done so), I jammed my left wrist under my body, and cracked my radius. I sat out the rest of the season, and never really made it back into the game. 4. The Load-Out. It was the first night of a one week tour opening for my pals, The Nadas. We were loading out of The Hub in Cedar Falls. It was late. Town was empty. Snow was falling. And I was, um, giddy. I was also a relative newcomer to hauling massive roadcases, which explains how I woke up with a torn muscle in my lower back that nearly knocked me out of the 2005 NYC Marathon. Except I didn't let it. 3. The '03 Raspberry. I'd been home from a three week trip to Hawaii for less than three hours when I decided to take a sunset bike ride along the river. As twilight became night -- that precarious time when one's eyes have yet to adjust to the darkness -- I hit a patch of gravel that laid my Cannondale and me out in the middle of 58th Street. The road rash on my hip took over a month to heal (but I ran the Stone Harbor Triathlon the next weekend anyway). 2. The Great Rock & Roll Wipeout Of 1997. Many a warning has been issued about CBGB's, the famous punk venue in New York City's Bowery; it's patrons were once pretty tough, it's restroom's notoriously filthy. Still, no one warned me about that last step, the one that comes at the end of the show when one's adrenaline is extra-strength and the cute girl you haven't seen since high school is walking your way waving. I went down with a beer in one hand and my guitar in the other. Both emerged unscathed. My left ankle? Not so much. It still cracks every morning. 1. The 2006 Playground Tragedy. It was a beautiful October afternoon, just a few weeks before my sixth NYC Marathon. I was at Riverside Park with nephews, Ethan and Edward. I'll stop at nothing to make them giggle, including full-fledged tomfoolery. Which is why I was on a slide made four five-year-olds. And which is why, midway down that slide made four five-year-olds, the sole of my size eleven Converse All-Star caught on the edge and stopped cold. Trouble is, the rest of me kept going. My taper came early, and lasted longer, but I still finished the marathon. And my right quad hurts every day. This blog post was first published as part of The Des Moines Register’s Hy-Vee Triathlon training series.