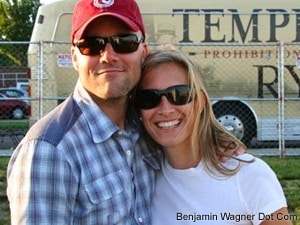 It was last June. The 30th, to be precise. My wife, Abbi, and I had flown into Iowa City that morning, then streaked westward on I-80. My pal, Josh Davis, was performing on the Authentic Records’ stage at the Des Moines Arts Festival when we pulled up to Western Gateway Park. Jason met us backstage, then whisked us off to do a radio interview.

Fast forward a few hours. The sun is setting on a sky choked with barbeque smoke. Everything is cast in deep, warm reds. I’ve performed my solo acoustic set to a lawn dotted with family members, friends, and strangers alike. I’ve run into an old friend from high school who is now teaching high school. And I’ve dipped liberally into the backstage keg.

“Yunno’ there was a triathlon over in Grays Lake Park last weekend,” he said.

“No idea,” Jason said. “But you should do it next year. Authentic will sponsor you.”

I pondered his proposal for a quick second, imagining myself breaking the finish line tape in an Authentic Records jersey, then turned my attention back to the stage he was about to occupy with his band, The Nadas.

I was born in Iowa City, Iowa, on September 4, 1971. My family moved to Washington, DC, a few days later. I didn’t stop moving (it seems) until landing in New York City thirteen years ago.

By day, I am a media executive (VP MTV News). By night, I am a singer/songwriter, blogger and documentary filmmaker (“Mister Rogers & Me” is in post-production). When Saturday comes, I am referred to — reluctantly — as what one race director once called, a “weekend warrior.”

Through it all, Iowa has remained only place to which I have returned religiously. With grandparents, aunts, uncles and cousins in Waterloo, Cedar Rapids, and Grundy Center, it is my geographic and existential home.

And I’ve developed an even deeper sense of home in Des Moines over the last few years. Jason and I met at the 2005 Sundance Film Festival and found immediate rapport in each other’s values and interests. Later that year, I recorded my sixth LP, “Heartland,” with The Nadas, released it on the band’s Authentic Records imprint, and toured with them for three weeks. I performed at Nada Silent Night III, at last year’s DSM Arts Festival, and in March at the band’s “Ghosts Inside These Halls” CD release. In fact, I’ve spent more time in Iowa in the last three years than the previous twenty combined, and I’m glad; I always feel warm, welcome, relaxed and inspired.

And so, when my friend, Simpson College Assistant Director of Alumni Relations, Tricia Martin, sent me an email that the esteemed Des Moines Register (for whom, given his druthers, my father would have me work) was looking for triathletes interested in blogging about their training for the Hy-Vee Triathlon, I thought, “Blogger? Triathlete? I’m in!”

More important than my time, though, will be my time with others. I’m pulling together some fundraising plans around the event, and hoping to host a party with some performances afterwards. Stay tuned for details on that.

Meanwhile, I think Jason owes me a jersey. Eh, I’ll settle for a beer.