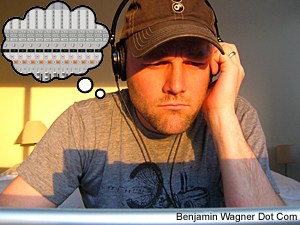 It’s Friday night at 6:43 and I’m still at the office when it dawns on me.

‘Shit, I still have to pick up the master tapes.’

Master files, really, but what’s a little nomenclature between friends?

All I want to do is go home, grab a beer and hang with the wife. But Travis Harrison and “The Invention of Everything Else” is waiting for me at Serious Business Studios. I make haste for the N train.

Trouble is, I’m a wee bit crippled on account of sprinting down a small mountain. So I’m taking the stairs down to the subway like an old man, leaning on the railing, and stepping gingerly. My quads are tender on the outsides on account of all the sharp turns I took on all those switchbacks. Maybe not such a bright idea after all.

Anyway, I pick up two CDs worth of data, nine gigbites in all, and race (albeit gingerly) back uptown. By the time I make it home, it’s fairly apparent that I’ll be opting out of Saturday morning’s Brooklyn Half Marathon.

“We can sleep in,” Abbi says winking.

Saturday afternoon, then, I backup a bunch of files to make room on my Powerbook, then transfer all 9G of rock & roll onto the drive. Forty minutes of file transfer later, I fire up ProTools, and prepare to rock. I double click on the single, “Giving Up The Ghost.”

“PTF Files Are Not Supported By ProTools 8.9 Or Lower. Please Consult Manual.”

After consulting the manual, it becomes clear to me that PTF files are not supported by ProTools 8.9 or lower. I have ProTools 8.83. I am, as the say, shit outa’ luck.

Multitrack recording is, basically, a collection of individual files strung together on a timeline. And so I begin importing each individual .wav file. Now, do the math with me: we recorded anywhere from 2-4 versions of nine different songs. Each version takes nine files, one for each input: my guitar, my vocal, Chris’ guitar, Tony’s bass, and five for Ryan’s drums (two room mics, one overhead, one close, and one low). That’s roughly 243 .wav files.

Worse, Travis has lumped a bunch of versions together, so the bass input for our quickie cover of “Wonderwall” is labeled “b_13” while the “Killing The Blues” is “b_14.” Better yet, they’re all jumbled together. The best way to parse them out? By ear.

Welcome to my weekend, ladies and gentlemen. Welcome to “The Invention of Everything Else”, the new record that — having learned from all of these records before — I was gonna’ do right.

Sorting through the files is a nightmare of a project. Everything looks the same: gray lines, orange mute buttons, numbers and dashes and dots. By Saturday night, though, everything is in place. I’m ready to track. I carry my laptop into the closet, set up my microphone, and commence inventing…

Trouble is, the closet’s not really much for rockin’. My laptop’s on the floor, and every time I bend over to start recording, I bang my head on the mic. Self-producing has other downsides. For starters, there’s no one around to tell you whether you’ve go nailed the take or not. So you just keep recording the same thing over and over and over again. And you’re alone for hours, pecking away at a monstrously ambitious project with no one to so much as crack a joke (or bring you a beer).

Until you crack the code, which, frankly, took me until this afternoon (when,in a dash of genius, I removed both guitar cases from the closet, and made a little desk out of crates and my sock bin). Seventy degrees and sunny outside and I’ve locked myself in an airtight, soundproof walk-in closet. That’s rock & roll.

So I’ve made some progress. The ladies of Raining Jane have their two tracks: “Breathe In” and “How To Be Alone” (which I’m considering calling “The Astronaut’s Lament”) — though they’d only bargained for one, so we’ll see how that goes. Jamie Leonhardt will get hers shortly. I’ve re-tracked acoustic guitars for more than half of the record. And I figured out a nice secret on the drums that opened ’em up and made ’em huge.

The bad news is, I discovered the unmistakable sound of a creaky chair in almost all of Chris’ guitar tracks. Sadly, there is no magic wand in ProTools. Mr. Abad will have to re-track his guitars next to my wife’s robe and my running shoes.