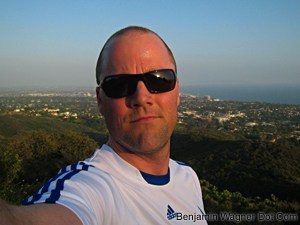 That was some serious Clark Kent shit.

I left the Santa Monica office at 5:43, pointed my Nissan towards Temescal Gateway Park (as I’ve done so many times before), and reasoned with myself the entire way there.

But that’s not the Clark Kent part (though I figure he did plenty of mental calculations when out of the suit; in the suit I imagine he just was).

So there’s no phone booth at the Temescal parking lot, so I opened both doors, and dropped my drawers. I was out of my sport coat and into running shorts and my brand-new Rio Vista Football jersey before anyone could blink (let alone call 911). I was on the trail before the chirp of the alarm that signaled that the car was locked.

Next thing I know, I’m sucking wind. Hard. Cuz the trail pops out of the parking lot and into the Santa Monica Mountains in a hurry. I figure I’ve got a thirty minute window on this impromptu run, which means roughly twenty up and ten down.

Seven minutes in, though, my calves are on fire. Eight minutes in, and I gotta walk a few paces. Eighteen minutes in, I’ve hit a summit. Not the summit, but a summit (1112 feet above sea level, according to my Garmin Forerunner). All of Los Angeles sprawls out in front of me. The Pacific sparkles to the right. A helicopter buzzes by at eye level. I can see planes taking off from LAX. I am up there.

It occurs to me at some point that I should sit a minute and meditate. Yunno, breathe in and all. Instead, I snap a phew photos, then decide what I really need to do is video tape my run down the trail.

It probably wasn’t the brightest move ever. It was prime territory for twisting an ankle, or sliding off a cliff. I probably startled a lot of people. And the footage is kind of sickening. But, it was somewhat exhilarating. And given that I had a flight in two hours…

Fast forward to LAX, sundown. The Hertz rental return lot lies directly beneath the east/west runway. Planes are lined up like a diamond necklace. They pass just 100 or so feet overhead every two minutes. Returns are stacked ten deep. Dudes in suits with Bluetooth phones and Blackberries are everywhere.

Which is the scene into which I emerge from my Sentra in running shorts and a soccer jersey. And while it’s doubtful anyone noticed, I felt a little like Beckham. Or Bruce Wayne. Or Superman, in reverse.

Because I stepped into the Hertz men’s room. I climbed back into my dress shirt, sport coat, and argyles. And then I slipped on the shuttle bus unnoticed, like I was just another business man heading home. Maybe I was. Maybe I am. Or maybe not.

Now, I never read the comic books, but I saw most of the Christopher Reeves films, and I’m pretty sure he never visited a day spa.

Twenty-four hours later, I’m back home with Abbi. Sushi’s on its way. And that bone-crushing, muscle-straining descent — partnered, no doubt, with five hours of fitful sleep in a narrow, shallow, insufficiently-padded seat — forced me to slip out of the office early, into a robe, and onto a massage table. Sixty short minutes of Exhale Spa’s “Deep Flow” later, I don’t so much feel like a superhero. I feel like me: a little reckless, a little stupid, a little manic, and a little sore.

And for what it’s worth, a whole lot happy.