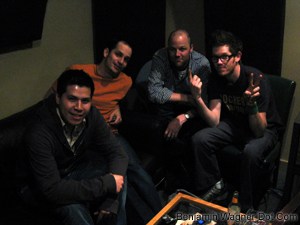 Whether it was nerves, or a lack of sleep (probably both), I was sick to my stomach all day. I dashed out of the office around five o’clock, and hopped the NR.

Stepping out of the subway at Prince & Broadway is a little like stepping into a Middle Eastern bazaar. The streets are narrow, the sidewalks are crowded with tourists and vendors. It’s not a good place to be when you’re in a hurry. I took a deep breath, and endeavored to take my own advise.

Serious Business Studios is on Spring & Lafayette, right across the street from trendy downtown eatery, Balthazar. Soho used to be pretty rock ‘n roll — imagine Lou Reed and Laurie Anderson tripping into a Jean-Michel Basquiat opening in some dingy, brick-walled gallery — but not so much anymore. It’s a mall now: tourists tossing Euros around at boutiques and cafes. Which doesn’t bother me too much; it was never my ‘hood. I’m a Hell’s Kitchen man.

All of which was running through my head as I strode towards the front door of my seventh studio release, “The Invention of Everything Else.” A month ago, it was a loose collection of demos I was circulating amongst my musician friends. Then it was gonna’ be a five-song EP. Then it dawned on me that maybe we could just record Chris, Ryan, Tony and I live, and release it as is…

We knew we had a bit of exploring to do. A few of my solo demos hadn’t found their legs as band songs. “Giving Up The Ghost” and “Promise” and even “Breathe In” were in good shape; we’ve performed ’em a few times. So you’d have thought we kick off our recording session with those. Nope. We started with the toughest, least-realized one: “The Last Time.”

I love this song. I can’t believe it came out of me. It reminds me of a Fifties rock song (“I believe I’m going down for the last time”), but it’s somehow current (“Write our names in black and white on the freeway”). The melody’s pretty catchy. But the demo just wasn’t translating. It felt unsettled, like the four of us were engaged in some rhythmic tug of war. So we tossed around ideas — each sensitive to one another’s input, each deferring (lots of “Whatever you think” and “Or something like that”) — and hacked through it over and over and over.

Deference and sensitivities were compounded by our lack of eye contact; Chris and I were in iso-boothes. Still, producer Travis Harrison dutifully rolled tape on each take, cracking us up with creative new ways to inform us that we were rolling (“Star of Academy Award winner, ‘No Country For Old Men,’ Josh Brolin!”). And eventually, the song found itself.

Once we had one keeper, we started tickin’ ’em off the list.

“Giving Up The Ghost” went down on the fourth take. “Promise” on the third. “Trying To Tell You” on the second. “(I Won’t Let You) Get Away From Me” a little less rapidly…

By nine o’clock, we could see the finish line. The Miller High Life’s had taken hold. You Tube videos were making their rounds. And we were spending as much time bantering as we were tracking.

In the end, we got six originals and three covers.

But by the end, it was clear to me that I was going to be spending a lot of time with ProTooling in my closet. I just don’t think I can live with the vocals. They were pretty good, but not forever good. You might not notice, but I would. So…

So midnight passed, Tony, Chris, Ryan, Travis and I drank our beers, and we listened to our record. And then — after full rounds of hip-hop hugs and congratulations — we began disbanding, one by one, into the warm spring night.

In the cab back uptown, Chris said, “We did well. I think you have a lot to work with.”

Walking down 56th Street, I thought about this invention. It’s a different thing than anything I’ve done before. The songs (most of ’em, anyway) are about relationships working, not failing. And the songs are the band’s songs, not just mine. They’re informed by conversation and collaboration. They’re not the result of a singer/songwriter creating in a vacuum. They’re the result of four friends sitting together and working it out.