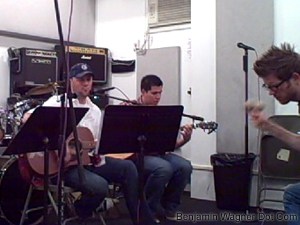 Like I said to Tony before the everyone showed up for rehearsal, “If you’re gonna’ be ambitious in a big way, you gotta’ be prepared to fail in a big way.”

I’ll be honest. It wasn’t our best rehearsal ever. Which is only slightly alarming given that we’re recording a new album tomorrow.

I don’t relish sneaking out of the office to get to rehearsal any more than I relish lugging my guitar to the office in the first place. But there it is. Or, rather, there I was walking briskly down the shoulder of Seventh Avenue. The other pedestrians around me were scurrying for the 6 p.m. LIRR. I was racing to Ultrasound Studios 30th and Eighth, though, for a quick dose of frenzied, $32/hour rehearsal.

I guess it went well enough. I mean, the deck was stacked. We were getting together early (six o’clock) on account of our collectively ridiculous schedules. And while we’ve performed most of the songs we’re recording (“Giving Up The Ghost,” “Promise,” “Breathe In”), we had some arrangement to do in our brief two-hour window, especially for some of the newer songs, like “(I Won’t Let You) Get Away From Me” and “The Last Time.”

Four guys rallying around the same thing — anything, let alone an esoteric, creative endeavor like music — isn’t an easy thing. It’s tough to say, “Can you play something greener?” or “Try something a little more open.” It’s tough to manage one another’s feelings (what one plays is, after all, a reflection of their capabilities, experience and taste, all rolled into one). And it’s tough to remain patient when you know then next time you’re together is to capture something, um, forever.

But, there we were: Chris, Ryan, Tony and me. We got rolling late; we weren’t all on hand until 6:45. And we never really hit our stride before the dude burst in and said, “Time’s up.” (Though, always the multimedia producer, I did manage to shoot the quick bit of video below).

All said, the stakes aren’t impossibly high. For starters, no one’s clamoring for a new LP. If it’s no good, I’ll scrap it. If it’s an EP, I release an EP. Of course, we’re recording live. But the miracle of studio separation means that, well, everything’s separated. So we can toss out all the guitars. I can re-do vocals.

What we really need to nail is bass and drums. And we have eight hours to do so.

So I just sent a text message.

We’re making a record tomorrow, my seventh studio LP. Please, sleep well. Listen to the songs en route. And when we play, settle into ’em. Enjoy ’em. They aren’t rocket science. No need for overthinking, complex polyrhythms, or reinvention of the wheel. All we need is heart and soul. The rest will follow. :) See you around 5:00. XO

All it takes, really, is a coupla’ deep breathes.

Do I sound like I’m talking you into this? Or, do I sound like I’m talking myself into this? Could be. It’s nearly midnight. The guys and I split up after a “One & Done” beer at Twins on Eighth Avenue. Then I raced back uptown through the transients, tourists, and transvestites that gather in and around Port Authority. Now I’m now sitting in an edit suite with Chris working on “Mister Rogers & Me.”

If you’re gonna’ be ambitious…