Though You Failed, At Least You Tried 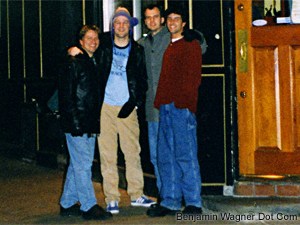 I love this story.

“I just had this random thought,” Petty said. “‘I really liked that band, I wonder what it would be like to get them together?'”

And so he did.

“I was driving home from getting groceries at Kroger’s, and my cellphone rang,” said [guitarist] Tom Leadon. “He said, ‘Hey, it’s your old pal Tom Petty.'”

A few days of enterprising songwriting and recording later, the band — defunct since 1972, when Petty struck out on his own and began one of rock’s most productive hit making runs — is releasing an album on Reprise Records, and playing a week-long stint and LA’s esteemed Troubadour.

It smacks of some sort of universal fantasy, the dream that, someday, a random call is going to pluck you from obscurity.

Inevitably, the story reminded me of my old Smokey Junglefrog bandmates. Sadly, the likelihood of one plucking me from obscurity is low, though we do speak periodically.

Smokey Junglefrog is, of course, my middlingly-successful college band. The rock ‘n roll fantasy took hold then, really, opening for other, less-middling bands like The Mighty Mighty Bosstones (whose front man is currently music director for The Jimmy Kimmel Show) and The Samples (who are still wearily slogging it out on the road).

We wrote songs by consensus (the last time I’ll ever do that). I was encouraged to “write about nothing.” So we ended up with songs “Friction,” which sounds good but doesn’t say much.

You might know the face she wears
But you won’t find her anywhere
You’ll feel friction, you’ll feel pain
You’ll be bored out of your brain

Still, we released three records of the stuff in just over two years: “Crumble,” “Au Gratin,” and “She’s My Niece.”

We were nominated for the laughably-named SAMMY (Syracuse Area Music Awards) in 1993, attended the ceremony the day before I graduated, and lost.

Bassist Paul Perreault called me out of the blue just a few weeks ago. I called him back to find him pretty much where I’d left him last: tending bar and making music in Flagstaff, Arizona. He sounds just as happy as ever.

Drummer Tod Salmonson and I speak pretty regularly. He attended Abbi and my wedding in October, and jammed with the rest of us into the wee hours of morning. He’s married with two adorable twins, living in Westford, Massachusetts, and working in real estate.

The closest any of us came to making that “I wonder what it would be like” phone call was when when I asked the guys to share a solo date I’d booked at Boston’s Kendall Cafe (don’t look for it; it’s not there) back in 2001. It was the closest we ever came to reuniting, and wasn’t entirely terrible.

In fact, I just woke just moments ago from an odd dream, and everyone was there.

Nada front man Jason Walsmith and I dropped by Paul’s Boston house (though it looked suspiciously like my band’s college haunt, “The Smokehouse”) to clean up before heading to the next town (Cleveland, as it ends up). No one was supposed to be home. When we got there, though, a colleague of mine was out front rummaging through the trash. The front porch (carpeted with fierce-green Astroturf, as I recall) was set like a stage, and littered with the remnants of last night’s party: mic stands, amplifiers, and empty plastic cups. Inside, singer/songwriter John Luddington (who lived with Paul after college) was banging out one of his Mad Lib-style songs at an old typewriter. Paul was prowling the halls, smiling as always. And in the bathroom, in a tub beneath a towel, I woke Jamie and his college girlfriend, Jill, from some sort of hangover remedy. In the dream, I was trying to reckon my work schedule with The Nadas tour schedule. Later, as we sat around the living room trying to synch my schedule to The Nadas, I noticed that Jason had gained an inordinate amount of weight, due, according to a review I was reading in the dream itself, to life on the road and the nature of the band’s midtempo sets.

And then I woke up.

In precisely eleven hours, Chris Abad, Tony Maceli, Ryan Vaughn and I are meeting to rehearse a new set of songs. In thirty-five hours, we begin recording my seventh solo LP. And Friday night, The Nadas roll through town.

Maybe that’s why it’s all jumbled up inside my head. Or maybe it always will be.
Maybe I’ll be waiting for that call until the day I die.

Or maybe, someday, I’ll make that call myself.