The Prince Of Tides 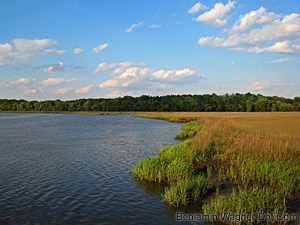 In my experience, most vacations yield a similar dividend.

Whether one steps out of one’s experience for three days or three weeks, time off from one’s daily routine inevitably motivates an assessment of said routine. And rarely does that routine benefit by comparison.

Not surprisingly, then, the first thing I noticed upon landing in Charleston, South Carolina, was the thousand hues of green. The second was the bright blue sky, more than I’d seen in six months.

Shortly thereafter, I commented, “Wow, a there’s a lot of action in middle of the day. Who knew?”

Why would we? Most of us spend the bulk of daylight in a hermetically-sealed, recycled-air fueled cube. Fancy as my office might seem, it is, after all, just a 10×15 rectangle. Sure, the Empire State and Chrysler Buildings are just outside my window, but for 99.9% of my day, I’m staring into a computer screen, not out the window. Most of the time, I don’t know the weather conditions, let alone the temperature.

It took nearly two days to shake the unsettled feeling in the pit of my stomach that something bad was happening back at the office (a paranoia aided by the fact that I carry a small inbox in my left pocket, even where reception is spotty). In fact, it wasn’t until the weekend — when email traffic slows some 95% (not entirely, mind you) anyway — did I begin to relax. Of course, it could have been the influence of the environment.

The Low Country of South Carolina, though the fastest growing region in the South, is a tranquil place. A few miles out of Charleston, the forest grows dense with live oak, Spanish moss, balsam fir, and yellow birch. It’s not difficult to imagine the region as the Yamasee and Cherokee knew it before European conquest. Nor is it difficult to imagine why the Spanish and French found the area so desirable; from white-tailed deer to red fox, turkey vultures and the Carolina wren, it’s teeming with wildlife. Moreover, the seventy-five miles of coastline between Charleston and Savannah, Georgia, is riddled with rivers: the Edisto, Coosawatchee, and Pocataligo.

Which is where the last few days found me.

Abbi’s family just completed construction of a lovely four-bedroom colonial on Brays Island, an modest little island on the Pocotaligo roughly equidistant between Charleston and Savannah. It was a house warming of sorts, complete with Abbi’s folks, sisters (Pembry and Meredith) and significant others (Pedro and Ned).

It was action-packed few days, really: boating, skeet shooting, fishing, running and swimming. And games. The Kellers don’t mess around with their games. Dictionary was innocuous enough. Cranium was fun. Battle of the Sexes grew downright contentious.

But it was the downtime that provided insight, and prompted the questions, “What am I doing killing myself in New York City?”

Why do I spend all day inside when there’s so much sunshine outside? Why do I live in a city choked with pollution when there’s fresh air left to be breathed? Why do I stare at a computer when my eyes can slowly meander the horizon for golden tailed eagles?

Why do we spend our entire lives enduring a hostile, soul-crushing existence in exchange for a few years of quality rest?

What does it take, then, to break free? To choose an alternative? If life is what happens while we’re making other plans, how do we plan on embracing the ebb and flow, taking in the great vistas, and shattering routine?

Spring was breaking all around us. Fields were brushed blue and red. A cormorant held station over a nearby pond, posing with his wings akimbo to attract a potential mate. A young foal was finding its legs in the pasture by the paddock.

Late one night, when the tide was low, I tip-toed out into the marsh and knelt in the grass. Birds were chirping in the trees. The wind was whistling through the reeds. I could feel my chest rise and fall with each breath. I could hear my heartbeat. And below it all, just barely, I heard a low, nearly inaudible gurgle — like a thousand tiny bubbles bursting.