Giving Up The Ghost (Live) – Video 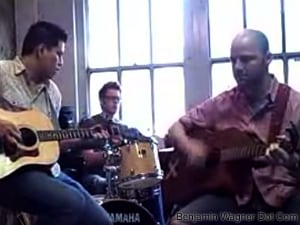 There’s a lot of hope in the Music Building.

The place is semi-legendary, at least to those of us who grew up watching Behind The Music.

The 42,000-square-foot building located on Eighth Avenue between 38th and 39th — catty-corner from The Port Authority Bus Terminal — is eleven stories of rehearsal space: 70, 350 square foot studios in all.

Imagine, then, just how many bands have trolled the graffiti-strewn halls since its inception in 1979. Like Madonna Louisa Ciccone, for one. And Chris Abad, for another. Chris rents a room there for ten hours a week and, twice now, has availed it to me for rehearsal.

The neighborhood is sketchy. Very rock ‘n roll. On Saturday, I told Chris, “This might be one of the last neighborhoods in Manhattan that still feels a little off, a little dangerous — like anything could happen at any moment.”

Where better, then, to pull together our new record. It’s a reckoning of all those forces. It’s a Behind The Music sans the gold records, hookers, or blow. It’s a record about what happens when real life ends up different than you imagined, but better.

“The Invention of Everything Else” isn’t just about ghosts, though. It’s about the morningafter Halloween, when the sun comes up, and all of the saints are celebrated.

Or not. Who knows. It’s not even recorded yet. I could lose my voice and blow the whole thing.

Anyway, here’s Chris, Ryan and I rehearsing what’s likely to be the lead track on the LP, “Giving Up The Ghost.” I’ve written about
the state of mind, if not the song itself. Heck, one could argue it’s the central narrative arc to the last seven years of this blog.

So, do check it out.