Eros, Logos, The Man & The Band 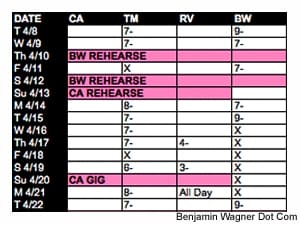 This is funny. Or alarming. Or both.

Remember when you were taught how to write a persuasive essay in grammar school? The form is simple: state your argument in the thesis, and support it with at least three data points. (I’m not sure that’s how Miss Purcell explained it, but close.)

Somewhere along the way, that formula’s lost on people, including — to some degree — myself. I’ve found that we cling to our arguments based on some sort of emotional connection to the past. So, when something like Web 2.0 comes along, people resist things like, say, blogging or embracing community or responding directly to audience feedback.

A prime example is the image above.

I consider myself to be more eros than logos, that is: more creative than logical, more intuitive than intellectual, more art than science. And that may be true. But at work, anyway, I am surrounded by people whose arguments are almost entirely based on feelings and habits. So, at wits end with some recurring arguments, I’ve embraced math.

Now, I wasn’t at wits end with Chris, Tony or Ryan when I came up with the Excel document — possibly my least rock ‘n roll move in regards the band ever — pictured here. We were just having a tough time tracking each other’s schedules, and we have a lot goin’ on. In fact, I have some fairly big news to that end …

But more on that next week.