A Ghost Of Hearts 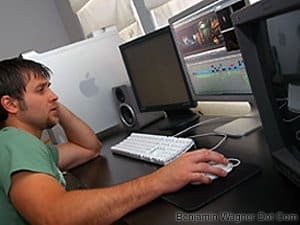 Like a lot of guys of my generation, Chris Suchorsky’s mind was blown by “The Empire Strikes Back.” What distinguished Chris most of the rest of us, though, was how geeked out he was by the making-of documentary he saw on HBO.

When Chris saw Kevin Smith’s no-budget, 1994 Sundance phenomena, “Clerks,” he wanted in on his New Jersey neighbor’s racket. A self-described “typical everyday Slacker, C student,” he doubled up and even audited film classes at Seton Hall. Once graduated, he began working in advertising, saving money, and writing his screenplay, “Executing Love.”

By the summer of 2000, I’d had it with the Advertising Agency and decided to shoot my film. I based my actions/steps on Robert Rodriguez’s “Rebel Without a Crew,” an autobiographical account of his attempt to make, “El Mariachi.” Rodriguez shot the film by himself for $7000, and sold it to Hollywood for around 1 million.

I set out to shoot a 95 page script in 6 six days, I rented equipment I could not afford, and I hired people (friends) who could not act. This was my failure.

A day or so after my film career ended, I had an idea. Why not turn my failed attempt into a documentary? Why not tell the story of a person trying to achieve a life-long dream and watch it fall apart? This film would become “Failure.”

I came across Chris via his new film, “Golden Days.” The doc follows indie rockers, The Damnwells, through a major label tussle not dissimilar from Wilco’s (also documented in Sam Jones’ “I Am Trying To Break your Heart”).

Please visit my “Making ‘Mister Rogers & Me'” blog to read all about Chris and my night on the town.