Give Me The Song 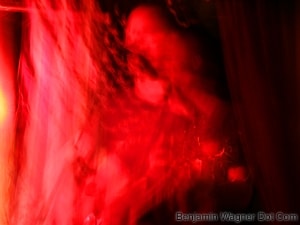 I woke up at five after just three hours of restless sleep.

“Golden Days” director Chris Suchorsky and I’d had at least one beer too many the night prior. All that talk about film festival dos and don’ts had my head spinning all night.

A five o’clock wake normally inspires a quick visit to the john, a glass of water from the kitchen, and a second stab at another few hours. Not today, though.

Even in the early seconds of waking life, I remembered vividly that REM’s new record, “Accelerate,” was just waiting to be downloaded; I’d pre-ordered it on iTunes weeks ago. Moreover, Chris Abad was playing in a mere fifteen hours. It was going to be along, rockin’ day. The system needed some light defibrillation.

I’ll concede to a fair dose of OCD. Tuesday morning, it manifested thusly: I withheld from pushing play on the record until the stationary bike’s profile was set (hills, level seven, 185 lbs, 15 minutes), and begun. My first listen to the new record from the band that defined my adolescents, edged musical exploration from Phil Collins, Don Henley and Bryan Adams to Velvet Underground, Pylon, and Husker Du would — age appropriately, perhaps — take place in my somewhat yuppyish building’s private gym.

REM’s “Accelerate” is made for these times. It is short, sharp, and loud. It’s an urgent wake up call to arms, a rapid fire, rapid eye movement. And it’s compressed to the hilt. Each of the eleven songs is a wall of sound, really, lacking almost completely in subtlety or dynamics. The lead single, “Supernatural Superserious,” is punctuated by signature chord progression (DAG, as it ends up) that is so clipped and modulated that — when cranked (as I am want to do) — I can practically feel my eardrums retreat into my head.

What does it take?

Later that night at a nearly-dark Bar 9, I slipped between clusters of Chris Abads’ friends snapping photos of he and Ryan performing. With just an acoustic guitar and cajone, they had rescued the room from its previous radio-ready, big-beat jukebox soundtrack. I joined them later to perform what felt like a ten-minute version of my “Dear Elizabeth,” Chris’ cover of Michael Penn’s “No Myth,” followed by Chris’ “Come Back.”

For that finale, it was just the three of us: Chris on acoustic, Ryan on cajone, and me singing backup and shaker. On stage, we were struggling to hear ourselves through the ancient, tiny PA system. Still, there was no pressure. It was Chris’ night, these were Chris’ friends, and we were at a local joint. Tired and tipsy, I smiled at Chris as we hit the chorus in harmony and unison:

Afterwards, Abbi gushed about Ryan’s playing; she’d never seen him on the cajone. It is a sight to behold. He straddles the thing, limbs akimbo, tapping a tamborine with one foot, and hi-hat with another. The sound doesn’t demand attention, though. It’s warm and round, integrated and almost subtle.

Later, Chris’ pal Mike Lee paid me what I consider to be a high compliment.

“Man,” he said. “It’s fun to watch you up there. You look like you’re having such a good time.”

I like REM’s new record, but not because it’s short, sharp and loud. I like REM’s record because, when I turn it off, I can still hear the melody in my head. What breaks through the noise, then, isn’t the single, over-modulated signal. It’s Michael Stipe’s lyrics; he means ’em, he feels ’em, and so do we. It’s Mike Mills’ backing vocals, slipping and soaring over and around the song like powdered sugar. Moreover, it’s the interplay between both men: twenty-eight years of friendship and creativity between them.