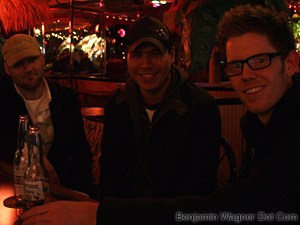 Stepping into The Distinguished Wakamba Lounge is like stepping off the continent.

But “the most distinguishing thing about the Distinguished Wakamba Lounge,” according to New York Magazine, “is probably the murder that took place on its doorsteps: In 2000, undercover cops fatally shot an unarmed security guard after unsuccessfully trying to buy crack from him here.”

Which probably explains why a huge, straight-faced dude was watching the door at four o’clock in the afternoon.

It’s just the kind of hang Chris, Ryan, Tony and I like to frequent after rehearsal, the kind of place where you might take a shiv to the rib cage, or receive a pet name from the bartender (in Ryan’s case, for some reason, it was “Debbie”).

The three of us (Tony being otherwise engaged) grabbed a few beers there Sunday afternoon following a brief but resolute rehearsal. We’d been cut short by an interview with MetroboxTV on the affect of digital compression on the music industry. Another nail in the coffin of major labels, I say. But no worries; what with ProTools and all, bruthas are doin’ it for themselves.

In our post-mortem, I told the guys that our run through “Dear Elizabeth” and “Giving Up The Ghost” (it was Chris’ rehearsal; I’m making a cameo) with just dual acoustic guitars and Ryan’s percussion sounded almost exactly as I’d intended to when I started making what I used to call “acoustic pop.”

Which is when I hatched my latest, TBA plan.

Meanwhile, you can hear what I’m talking about TONIGHT — though not at The Distinguished Wakamba Lounge. We wouldn’t wanna’ overwhelm that big dude at the door.