Will Commute For Food Fun 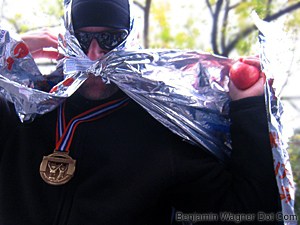 My friend, Tricia Martin, sent an email on Friday with this blurb from The Des Moines Register:

“Are you planning to compete in the June 22 Hy-Vee Triathlon in Des Moines? Are you willing to blog about your training experiences?”

“The Register has 10 entries to give away, and we are looking for a cross-section of Iowans to share their experiences with our readers.”

I just hit send on the following.

I’d LOVE to come home to Iowa to compete, and blog all about it! Here are my vitals:

Synopsis: I am a media executive (VP MTV News), singer/songwriter (benjaminwagner.com) and documentary filmmaker (“Mister Rogers & Me”). I was born in Iowa City, Iowa, in 1971. My family moved a month later, then five more times before my eighteenth birthday. With grandparents, aunts, uncles and cousins in Waterloo and Cedar Rapids, though, Iowa has remained my sole geographic and existential home.

Moreover, I have found a deeper sense of the word in Des Moines the last few years. The Nadas’ front man, Jason Walsmith, and I met at the 2005 Sundance Film Festival and found immediate rapport in each other’s values and interests. Later that year, I recorded my sixth LP, “Heartland,” with The Nadas, released it on the band’s Authentic Records imprint, and toured with them for three weeks. I performed at Nada Silent Night III, at least year’s DSM Arts Festival (which I plan to attend again), and just three weeks ago at the band’s “Ghosts Inside These Halls” CD release. In fact, I’ve spent more time in Iowa in the last five years than the previous twenty combined, and I’m glad; I always feel warm, welcome, relaxed and inspired.

Atheltically, I’m — reluctantly — a “weekend warrior.” Accordingly, my goal for the Hi-Vee Triathlon is a modest 2:40:00. That said, I’m working up plans with my pals in The Nadas and at Authentic Records to fundraise around the event, and host a party/performance afterwards.

I am an avid writer who currently maintains two blogs: benjaminwagner.com and mrrogersandme.blogspot.com. It would be my pleasure and honor to contribute to The Register (where, if my father had his druthers, I’d be working instead of MTV News). I’m certain that the tales of this Iowan in New York training up and returning to Iowa would constitute a solid contribution to your effort.

I’m looking forward to hearing from and joining you soon in Des Moines!