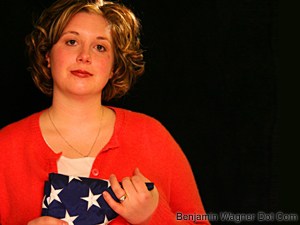 Far worse, though, 3,992 American soldiers have died, 29, 314 have been injured, and an estimated 20% of the 1.6M Iraq War veterans returned from theater with PTSD (post traumatic stress disorder).

You’ll recall that I opposed this war from the start. That said, I wanted to be wrong. Five years later, I hope we have the fortitude and focus to end it well, or at least well enough. My hopes are not high.

Earlier this week, I spent some time with eight young Iraq War veterans. The horrors they’ve seen is written across their faces, still they soldier on. The losses they’ve suffered — friends, limbs — mark their bodies and minds.

One young woman, 29-year-old Medical Service Corps officer Jessica McDermott, departed North Carolina for our three-day shoot just hours after learning that her grandmother had died. She fought through tears to tell her story, and the stories of those who could no longer tell theirs.

Today, if nothing else, my hopes are high for her, and all of her comrades.