Where We Can Shine 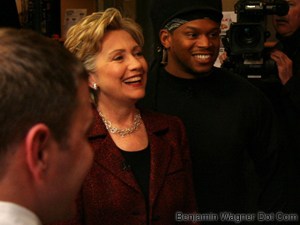 I’m in the back seat of a rental van some 23 miles west of the New Jersey state line. New York City is ahead of us, casting an orange glow on the horizon.

It’s been an interesting few days, much of it was spent with eight young Iraq War veterans — emphasis on young. These are kids. One was carded at the hotel bar. One couldn’t stop her cheeks from blushing (or, that matter, her eyes from tearing). And one couldn’t even begin to manage his frustration. They’re kids: naive, boastful, insecure and overwhelmed.

And yet they told harrowing tales: administering to 83 casualties in one night, shooting another man at point blank range, flipping a Humvee. Or worse, coming home to a country more interested in Paris Hilton than Paris, France; a culture too distracted by ET to learn about PTSD.

Still, they maintained in the face of a chaotic five-camera shoot with the two remaining democratic presidential candidates, Barack Obama and Hillary Clinton, with all the fixins: secret service, national press, flashbulbs, spotlights, and generic hotel rooms.

My primary role on these shoots was to oversee the rollout of all the content online. Secondarily, I was asked to shoot behind-the-scenes photos. It was the second gig, really, that got me the access. I was any arm’s length from the candidates both nights.

So what did I think of the candidates?

Barack seemed tired, presumably as his shoot was on the eve of his big speech. And because he’s been battling hard for the nomination for six months. Still, he was as advertised: broad strokes, big picture, hope.

Clinton, in contrast, was on. She was engaged, energetic and warm. Moreover, she was brimming with details, especially on the war in Iraq; she was fresh from her big speech. So she’d’ not only done her homework, she’d’ written a lesson plan. I’ll be honest: it was impressive.

Of course, the whole thing was a traveling circus. There were at least 250 people making sure the event come off, from grips and advance teams to PAs and policemen. There were caterers, mobile generators, press buses, shuttle vans, an 18-wheel production truck — and a horse.

In the end, though, it was all about these kids and the fact that there are well over a million of ’em.

In the end, I’m still torn between hope and despair. These are dark days. The empire is over-extended. The economy is in ruin. The Interstates are falling apart. I’m not sure if this is the End of Days, or just the beginning of something else.

I can see the Empire State building now. It’s cast in white tonight, its gleaming Deco spire towering over Midtown.

And to my right, the Statue of Liberty stares out to sea. Her back is turned, but her light still shines.