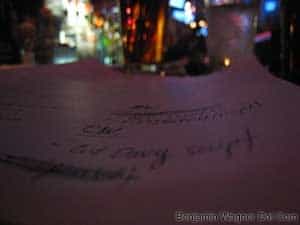 Brace yourself; the following story may blow your mind.

Just this past Sunday, Nada front man Jason Walsmith and I were sitting around his Beaverdale, Iowa, living room recovering from the previous night’s show and preparing for the next. We’re watching TV when he said, “Lemme’ show you this documentary.”

He surfed around his Tivo menu until he found Iowa Public Television’s “More Than A Game.” The film, “a look back at girls’ 6-on-6 basketball and what it meant to generations of young women who played it,” features a new song from my Des Moines rock star friends, “Play Like A Girl.”

Fast forward to Tuesday night. Chris and I are saddled up to the bar at The Dead Poet. We’re well into our second pint, and nearly done with our cheeseburgers. I’m scribbling all over the film’s outline, clarifying our respective assignments for the coming days (“Chris: Cut Davy. Ben: Script Pittsburgh”).

“Excuse me,” the gentleman next to us says. “Is that some sort of script?”