In The Roaring Traffic’s Boom (Day And Night) 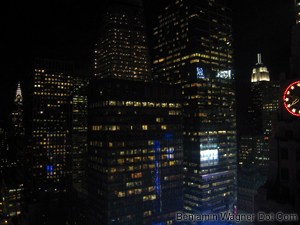 Thirty (or so) years ago, my parent’s took Chris and me to a traveling production of “Annie” at Chicago’s Shubert Theater.

Two moments from that matinee stick with me to this day.

The first is the sheer terror I felt shrinking into my seat as Mrs. Hannigan screamed at the orphans, “You’re gonna clean this dump until it shines like the top of the Chrysler Building!”

The second is the absolute jubilant release I felt when Annie stood on top of Daddy Warbucks’ grand piano and belted “The Sun Will Come Out Tomorrow.”

The latter (as I think I’ve said before) has influenced nearly every song I’ve ever written, if not my entire ethos. Despite a fair dose of dark, sleepless nights, the sun has always come out in the morning.

The former — the 1, 047 foot Art Deco skyscraper there at the intersection of 42nd Street and Lexington Avenue — has returned to me in a new, special way of late.

On Monday, I moved into a new office in the southeast corner of 1515 Broadway. My windows overlook Times Square from twenty-nine stories. The New York Times clocktower stands to the south. The Chrysler Building is due east. The Empire State Building is in between.

I paused to take it all before leaving tonight. Everything was shining from up there in the sky. Everything felt manageable.

There, at the end of another twelve hour day on four hours of sleep, I thought, ‘Not bad for a kid from Iowa.’

I turned out the lights, stepped through the door, and walked home through the roaring traffic’s boom.