Raining Jane: On Any Given Sunday 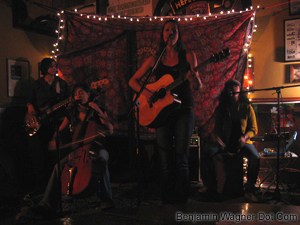 Forget that the music industry doesn’t know what the hell it’s doing with itself. Between MySpace, iTunes, ProTools, Twitter, YouTube and the rest, bands don’t need major labels anyway. They’re doin’ it for themselves.

In some strange way, 2008 may as well be 1908, or 1808. America’s highways are packed with minstrels and troubadours: folk-rock, prog-metal, pop-fusion, and everything in between. And on any given Sunday, you’ll find them at clubs like The Vogue in Indianapolis, Indiana, The Little Bear in Evergreen, Colorado, or The Rhythm Room in Phoenix, Arizona.

The quartet ping-pongs from the sacred to the profane effortlessly — from the pensive “Wyoming Skies” to the hilarious “Big Girl,” to the minor-chord kiss off of “Desperate Sails” — all tossed off with a wink, a joke, and harmonies like nobody’s business.

Heck, they do “Somewhere Over The Rainbow” and — more than just making it work — kill it.

That they shared the stage with me and elevated “Dear Elizabeth” to goose bumps and nose bleeds is, well, gravy. More like chocolate syrup, or caramel. Whichever.

Or that they took to Nada front man Jason Walsmith’s “Blue Lights” and — with a cello, cajone and buttery harmonies — transformed it into some sort of nostalgic lament.

The thing is this, the music industry may be fucked, but the music — as long has super-capable, super-engaging bands like Raining Jane are tearing up the highways — the music will be just fine.