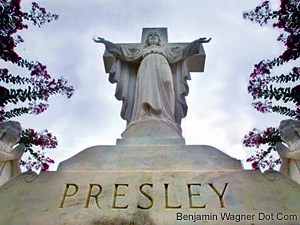 “I ran down Elvis Presley Boulevard beneath a sky bruised purple and gray and orange at the edges,” I scribbled in a journal entry dated October 21, 1996. “It’s the type of sky that removes roofs indescriminently.”

“It’s rumbling now, waiting to break, I’m sure, just as I step from the tour bus to the property — or shortly thereafter, when I resume my 670 mile trip north.”

Twelve years and thousands of miles later, that last-minute pilgrimage to Graceland makes better sense to me. I can see now that, like me, Elvis was also trying to fill “that God-shaped whole.” He didn’t know it, though. And he didn’t have the support structure, or wherewithal to figure out that all the adoration, adderall and applause in the world isn’t gonna’ fix what was broken. Nothing can do that but time, something that Elvis didn’t have enough of.

In the moment, though — sitting on my bed there at The Heartbreak Hotel — I had nothing but time. I was 24-years-old. I’d lived in New York a little more than a year. I’d already released a record here, played shows (including one at Cafe Sin-e, legendary thanks Jeff Buckley), and was just about to start a new job at MTV.

I was going for the big time.

And so — watching local news as Heaven itself split open and tossed thunderbolts towards the Memphis skyline — I wrote this song: “Waiting At Graceland (First In Line).” In it, I imagined my backyard as a posthumous shrine. In it, I imagined myself as The King.

I performed the song for years, but never recorded it. Until now.

Waiting At Graceland (First In Line)

I’m going for the big time, larger than the huge
Save my wrinkled pages, be sure to bronze my shoes
I’ll be home on Tuesday morning I was
Thinking you could use a little time
So I’m waiting here at Graceland first in line

Build a place to store my trophies
Something modest, seven stories
Each to store a portion of my life

Charge admission to everybody
Except the young, they’re so aware
They love the way the lawn is strewn with lights