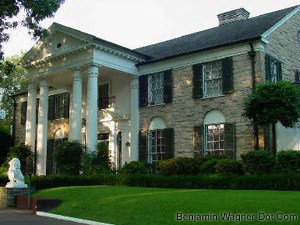 “It always rains when I’m at Graceland.”

Just thirty-six hours earlier, I’d hatched a half-baked (actually, I was really baked), last-minute plan to squander the weekend prior to my start date at MTV News on some sort of spiritual journey, a symbolic mile marker, I imagined, on the road trip of life.

The place had always held some sort of mythic, magnetic sway over me. Elvis’ music never meant much to me, but his myth did. I’d visited once after college (listening to Willie Nelson’s cover of Paul Simon’s “Graceland” the whole way), and found the whole thing a tad undewhelming, almost laughable.

I’d recently read Peter Peter Guralnick’s, “Last Train to Memphis.” But it was still before my full-on Elvis obsession kicked in: before building a shrine in my apartment, and digging into the dark side of his story though books like Goldman’s “Elvis: The Last 24 Hours” or Whitmer’s “The Inner Elvis: A Psychological Biography of Elvis Aaron Presley.”

Nah, I was just killing time with what I figured was a cool, pop culture road trip; a little something to tell my friends about. A life experience. And adventure. Like the time I drove from Philadelphia, Pennsylvania, to Darwin, Minnesota, to see The World’s Largest Ball of Twine only to find it was in storage — but that’s another story for another time.

The itinerary came together quickly. Motivated by an empty apartment (my brother was out of town), and a broken heart (the woman I’d been dating had just broken up with me), I called Amtrak and booked a seat on the Empire Builder. My plan was to ride the rails north to Albany, then west to Chicago where I’d rent a car and follow the Mississippi south. Somewhere in the darkness between Rochester and Cleveland, though, it dawned on me that I could hop out in Toledo (where my father then lived), grab breakfast, then cut a diagonal from there.

Twenty-four hours later, it was over. With just a porcelain bust and Sun Studios mug to show for my efforts, I was already headed north. I scribbled in my journal as the train barrelled down the tracks.

Graceland is some 700 miles to my south, now, but still so vivid. What an amazing place, a global pop culture crossroads. What brings people there, like deer to a salt lick for their ceramic busts, imitation sunglasses, license plates, t-shirts, thimbles, coasters, cards, and collectors spoons?

It’s the dream, I think.

The dream of coming from nothing, and streak like a meteor across a bland landscape with shimmy and shake and soul overflowing like dripping wax. The dream being known by everyone on a first name basis. The dream of having a jet named after your daughter, a mansion in your twenties, and a boulevard when you finally — tragically (and with no official explanation from your estate) — die.

There is so much sanitization there. I only saw one bloated Elvis, towards the end of the tour (approaching the melancholy-soaked Meditation Garden). Every other photo of him was rosy-cheeked and youthful, like Walt Disney himself is behind the entire operation. Human tour guides have been replaced by an “acoustic guide” audio tour to assure, I suppose, that only one, unified biography of the man reach the adoring, tour bus riding fans. It makes for an especially odd tour, silent, not from reverence or museum etiquette, but intimate, headphone narration. I turned off the headset in the living room to listen, grinning as the faux-country accented narrator whispered into dozens of ears personally, and simultaneously.

This time, though, I noticed the absence of Elvis’ stillborn twin, Jesse Garon. And I noticed a tension, an unease, a half-smile in every photo of this working class, Tupelo family so overwhelmed by wealth and fame.

And as we departed the estate on the shuttle bus, I noticed a plaque with copyright restrictions posted right there on the front lawn.

His fans seemed awed there, but unsure as to why. Don’t they see the lie? The homogenization of The King? Or do they too aspire to four televisions and a racquetball court out back?

It’s tough to say. I’m not sure most of us know, or have thought it through. It’s almost as if people go to Graceland just because it’s there, like Wall Drug, or Reptile Gardens, or South of the Border. But make no mistake, Graceland is a shrine, complete with a car dealership next door and a Shoney’s across the street.

I’m not sure what I found there. A little bit of me, I guess: the crooning, the cravings, the bouffant, the bee-sting lipped lover, the innocent, and good son. Maybe that’s whey we’re all there. Elvis is a mirror on all of us, and Graceland is some sort of cross-cultural living room — a rest stop between Heaven and Las Vegas.

Tune in tomorrow to read the the story behind my song, “Waiting At Graceland (First in Line),” and download the MP3.